The best hole I ever played: A Kansas gem that’s a two-part test in strategic thinking 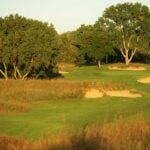 A look at the par-4 6th hole at Prairie Dunes in Hutchinson, Kansas.

Perry and Press, the Maxwells, were the father-son duo behind Prairie Dunes, a design aficionado’s darling in Hutchinson, Kansas. Perry, the dad, built the original nine holes in 1937. Press finished the other nine holes 20 years later, after his father’s passing. One of those holes, the par-4 12th, has the most (in)famous tree on the property, a towering cottonwood with gangly limbs that often swat approach shots from the sky.

It’s a tasty bit of golf — but it’s not my favorite at Prairie Dunes. That honor goes to the 387-yard 6th hole in the current routing, a delightful dogleg-left par-4 that played as the 3rd in Perry’s original design. The walk from the 5th green takes you through a small cut in a tall dune to reveal a subtle but dramatic valley that frames the hole you’re about to tackle.

From the tee, the aggressive line is up the left, which leaves you with a shorter approach. Straying too far left is a problem, though, as you’ll be forced to take on a minefield of bunkers and a narrow angle to the green. A drive up the right is the safer play, though it yields a longer shot to the multi-tiered putting surface. Nor is it entirely without risk, as the far right is guarded by wild “gunch,” Prairie Dunes-speak for “thick fescue-looking grass with spikes.”

No matter what you call it, it’s nowhere you want to be.

Like all great golf holes, the 6th presents a two-part test of your strategic thinking and your shot-making skills. Regardless of the outcome — birdie, bogey or worse — it’s a wonderfully entertaining exam.