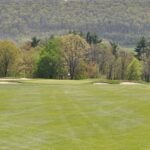 A view of Sugarloaf Golf Club in Sugarloaf, Penn.

Our knowledgeable crew of course raters have stuck pegs in the ground just about everywhere. Many of those courses you’ve probably know, but some are less renowned — at least for most golfers. In Best Course You’ve Never Heard Of, we celebrate those sneaky-good designs.

Sugarloaf Golf Club — the one in Pennsylvania, not the better-known Sugarloaf in Maine — was the course that really got me interested in the game.

Set in the Conyngham Valley, near the junctions of Interstate Highways 80 and 81, Sugarloaf is the only course I’ve ever played on doctor’s orders. A broken leg while serving in the Navy put me in the Philadelphia Naval Hospital in early 1969. When my cast came off in April, the doctors didn’t feel I was quite ready to return to the responsibilities of full duty.

Upgrade your golf shoes for your next trip Though I was not what you would call an avid golfer at the time, I did own a set of clubs. And so, being the good sailor that I was, I followed those orders to the letter, on a course that had just opened near my home.

Sugarloaf was designed by Canadian-born architect Geoffrey Cornish, on a site cobbled together by the owners of four family farms. The land is what you’d expect from repurposed farms. It has a gently rolling front nine, made interesting primarily by Cornish’s design and bunkering, and by vistas that have earned the course acclaim for its beauty.

The back nine is a different matter. Hills, creeks, trees, lakes and striking vistas make up a side that one doesn’t forget quickly, if one forgets it at all. Even today, more than 50 years after that restorative golf-filled spring, I have vivid recollections of every hole. An iron off the tee on the short par-4 10th. An uphill climb on the par-4 11th. The 12th, a par-5, with a view from the tee that makes the hike up 11 worthwhile: all of Pennsylvania seems to lie below.

Every hole is a pleasant challenge. It is a golf experience to be savored. Wonderful turf, splendid views, low greens fees ($20-$30) and gas golf carts for those who prefer to ride, though, as you might imagine, I recommend the walk.

This story would have a happier ending if the Navy had forgotten me while I was off following doctor’s orders. Alas, they found me. I still owed them two years, so they sent me off to Vietnam. No golf for that entire time, but I had vivid memories of Sugarloaf to sustain me, and I didn’t suffer any more broken legs.