The best hole I ever played: The exacting, par-3 ‘Bell Hole’ in England 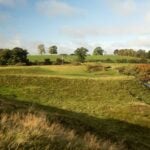 Splendidly isolated against a backdrop of looming hills, Brackenber Moor is vast — room enough for two 18s, but one of 5,993 yards will do. The golfing journey at Appleby Golf Club, in Brackenber, Appleby-in-Westmorland, England, is judicious, flirting with a natural feature here, tackling another full-on there. The most dramatic holes, though, are found toward the moor’s tapering peripheries.

Tracking the edge of England’s Lake District National Park, the short trip north to Appleby was a childhood favorite. Over sheep-grazed commonage, the course exuded a spirit of adventure perfectly aligned to the mischievous golfing antics of my youth. Whatever the occasion, a mixture of dramatic, sporty, fun and stern holes will entertain as much as they test. Ultimately though, at Appleby, it is all a preamble to the rarest of shorts: ”The Bell Hole,” the 176-yard, 15th.

Hilton Beck swerves in front of a rise. (A beck is a stream, for those not versed in the northern English vernacular.) Your shot must carry the scraggly dip hidden high beyond, skirt two sand pits upon the flat and hopefully nestle down into the bathtub green. At least flanking bunkers prevent a worst fate.

From the teeing ground, a marker post offers the only line, although a far right pin might just poke out. At 176 yards away, the raised green, even with its wall-like back and front, is no generous target. Averaging six or seven paces deep, it provides room for not many more than two of you, though the chances are the others have succumbed to its litany of punishments anyway. You’ll make sure to remind them as you ring the bell on your way to the next!