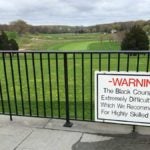 Bethpage was eerily quiet on the day golf returned to New York State, but golfers were happy to be out there.

Ed. note: The economy is reawakening, and so is golf. As states begin to loosen restrictions on the game, tee sheets at America’s courses are filling up again. To help chronicle this process and illuminate how the coronavirus pandemic has changed the game in ways both large and small, we’ve tapped our fleet of writers and editors — who are spread out across the nation, from New York, to Arizona, to Texas, to California — to document their first rounds back. Here’s James Colgan on his visit to Bethpage State Park.

Signs on the roadway in that once directed fans to the 2019 PGA Championship now drew chills, with warnings such as, “STAY HOME, SAVE LIVES” and “STOP THE SPREAD.”

In the usually packed parking lot where golfers famously sleep in their cars for a chance to play the vaunted Black Course, vehicles enjoyed a one-space buffer. Carts no longer whirred about. Players were given two options: carry or bring your own push cart. Most carried.

Outside the pro shop and right up to the payment window, messages inscribed on black pillars implored golfers to stay six feet away from one another. Doors were propped open so hands needn’t touch them. A near-hazmatted clerk stood on the other side of a plexiglass pane.

Few golf complexes feature a more diverse cross-section of the golf community than Bethpage, from pros clashing on the Black to high school kids hacking it up on the Green. Often the only common denominator is the chatter — be it hyper-technical golf babble or a lively debate about who accidentally steered a cart through a bunker. From a distance, it all sounds the same.

For a long while Monday, there was little buzz. Golfers walked deliberately. They putted on the practice green in silence. They stayed six feet apart. If they weren’t alone (and most were), they spoke to one other in hushed tones. Many wore protective face masks. The rain and frigid temperatures did little to brighten the dystopian vibe.

But as morning turned into afternoon and more golfers streamed onto the property, Bethpage gradually started to feel like Bethpage again. On the first tees of the Blue, Green and Yellow courses — the Black and Red courses open later this week — the silence broke.

Foursomes formed on the tee box with head nods for introductions (handshakes have been temporarily abandoned). Players cracked wry jokes about the state of their games. Clean contact earned praise, while shanks dews profanities. It almost felt … normal.

“I brought two kinds of snacks, but that’s about it,” said Bill Gray, who had a bandana tied around his neck.

Bill, who is a schoolteacher, roped his litigator brother Jack into teeing it up.

“It’s funny how you go out to try to forget all of this Covid stuff, but it pervades everything,” Jack said.

Still, they were back playing golf, which was something. Bill trash-talked Jack’s ill-advised, bunker-bound 7-iron; the brothers laughed when the wheel to Jack’s push cart snapped off; and otherwise blissfully escaped into their round.

“I guess I probably should be catching up on all the work I haven’t been doing now, but my brother called me and said, ‘Let’s play golf,'” Jack said. “It’s my first time out this year, but I guess now I’ll be playing more often.”

Up ahead on the 18th green, two friends, Ryan Hickey and Andrew McCarthy, had just finished their round. As soon as the state announced courses would reopen, Hickey jumped on a tee time.

“Normally I sleep out here Friday or Saturday with my cousins,” Hickey said. “Over the weekends, you get the best tee times doing that. I couldn’t imagine a summer without it.”

Hickey and McCarthy’s animated banter drew stares from the practice green to their right. But they didn’t seem to care. They were having too much fun.

Golf was back at Bethpage State Park and, if even for a moment, some semblance of normality had returned, too.