The perfect golf round is unplanned and unpredictable. It looks something like this 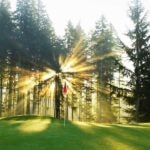 As you get older, you appreciate it more, whatever it is. In this instance, the game, the competition, the friendship.

You are not the kind of guy who likes to commit to a golf game — course, players, tee time — a week ahead of time. You have enough commitments. You’ve come to learn that life creeps in — weather, mood, forgotten dental appointments, the call of work or spouse — without anything like a seven-day warning bell.

You fear being overprogrammed and overbooked. Well, you’re not.

You like being available for surprise, to whatever the day brings.

A 9 a.m. call for a 3 p.m. tee time? That’s more like it, and if you don’t get the whole round, it really doesn’t matter. What actually does?

But this time, you did. You booked the game early because you can’t get a tee time at J’—– if you don’t. You called B and S, because they would appreciate J‘—– (and had never been) and because they actually enjoy the game for the game’s sake. They play golf without an agenda. At least, not one beyond the golf.

The appointed day turned out to be rainy and cold. Your spouse’s car wouldn’t start and you were the last to arrive, by a lot. B had his peg in, ready to go, when you washed up on the first tee and pulled your sword from its scabbard. You could see the relief on S’s face. There were four fellas hovering on the first tee, and they didn’t look especially fast, if a headcover-count is a reliable predicter, and it is.

Your opening bogey without a practice swing was a mood-lifter, enhanced by the five-footer you made to go 1 up on B (while losing to S). B gives you a half-shot per hole, all the way around. You’ve been playing this way for 35 years. It works out. He’s a 78-shooter and you’re an 88-shooter and you both believe there’s something vulgar about the full shot. A full shot is so heavy.

You have one match with B and one with S, and S has one with B.

That’s it. Straight matches, no junk. No barkies, sandies, automatics or closeouts. Please.

B was keeping a card. A new development. He can give you play-by-play from matches you had in 1999. He is never the star of his own stories. If you play alternate shot with him, he’s happy if you put him under a tree in a gnarly lie. A chance for him to summon-up some magic.

J’—– is as public as public could be. It’s inexpensive, well-maintained, easy to walk, special. Some of the tees are crowned and hurting for grass. But you know, the rules generously allow the use of a tee for a first shot on any hole and a concave teeing ground gives you the chance to play off a fade lie or a hook lie, according to customer personal preference.

Gifts show up in the most unlikely places.

B marveled at one green after another. J’—– was designed by one of the Old Masters and the greens slope and sloop and whish and whoosh. They don’t build them like this anymore. They don’t build courses like J’—–.

S hits it a mile. He has Henrik Stenson’s body type and Henrik Stenson’s swing. B is an actual golfer with every shot and the rhythm of a natural athlete. Your saving grace is that you try. You try and you care, likely too much.

Your saving grace is that you try. You try and you care, likely too much.

The matches were close, or close enough. When S hit one drive a mile right but in play, you offered B’s thought bubble for him: Can’t believe I’m losing to this frickin’ guy.

That kind of game.

S has the most mechanical putting stroke you’ve ever seen. Mechanical and excellent. You don’t root for him to miss because, one, it’s not sporting to root for a miss and, two, he’s likely going to make it anyhow.

Nobody talked about the weather. S wore a ski cap and you did, too. All three had made the comes-with-age concessions to the golf’s other game. Weird putters, weird putting grips, weird putting routines. It’s all good.

The camaraderie was palpable. It was the course (excellent), the weather (crummy), the company (excellent). It was a joint thing. You know: come together.

On 18 tee, B said, “You can’t lose.” You talk about a gentleman golfer. Many of your matches with B are settled on the last. Somebody is 1 up with one to play. Somebody can’t lose.

The last at J’—– has a pond and a lone tree and a super-funky green. Over the green and across the parking lot is a plain-Jane pub/lunchroom with every kind of beer, hot dogs, eggs made to order, hot tea and coffee, women serving it who turn back the hands of time. For the day, S was 2-0 and B was 0-2. B and S both loved the course, too. You knew they would.

Finally, you and B and S headed out, to your waiting horses, golf bags on your shoulders. S stopped and asked for a hug. In a lifetime in the game, you can never remember that happening before. A little surprise. S saw a moment and grabbed it.

Also, as you get older? You appreciate it more, whatever it is. In this instance, the game, the competition, the friendship.

There was like a hint of dew on S’s ski cap. You could feel the warmth in your cheeks. You know: the hot tea, the fried-egg sandwich. The day.