The top 10 courses I ever played: A look at Michael Bamberger’s ever-changing list 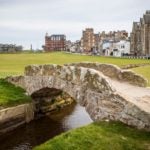 The Old Course ranks as one of Michael Bamberger's top tracks.

GOLF recently unveiled its Top 100 Courses in the World, which included all the well-known iconic gems like Augusta National, Cypress Point, St. Andrews and, well, you get the picture. But there’s more than one way to make a list, so here’s ours! Now, GOLF staffers will take their turn creating their own ranking, but not of the best courses in the world — the best courses they’ve played. Enjoy, and if you haven’t made the time to create your own list to dissect and look back on, now’s the time to get started.

These are my 10 favorite courses listed in the order in which I fell in love with them as of today. Tomorrow’s list could be different.

Winds, plural. A tiny course on a peninsula with winds coming at you in every direction.

Some of the best times in my life I had right there. Thank you, Ken.

The ferry ride there only improves it. You can see the Long Island Sound on every hole. The holes comes out of the earth.

Sneakout fun. A nine-holer with some of the greatest greens in golf The site of my greatest golf achievement, the 2019 St. Martins Spring Championship. Yes, a net event.

My home course. As Herb Wind once said, in a sexist time, “You may sooner insult a man’s wife than his golf club.”

Muni. As we all know–and I believe this is from a Beck song: “Public golf. It’s where is where it’s at. I got two lob wedges and a microphone.”