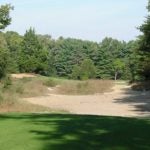 Our knowledgeable crew of course raters have stuck pegs in the ground just about everywhere. But which holes stand out as the greatest they’ve ever played? We asked them, and they replied with love letters about their faves. This offering comes from Chick Wagner.

The par-4 11th hole at Pine Valley is the most natural golf hole on the top-ranked golf course in the world. It was a “found” hole. The land is perfect. They didn’t have to move any ground. That is true even of the green, which, unlike most of the other green structures at Pine Valley, was left untouched. The green slopes severely back to front and is bowl-shaped, just like the little valley in which it sits.

The hole — 390 yards — plays as a slight dogleg right, and the tee shot requires some thought. If you let it slip left, or hit it too far straight away, you are blocked out by the trees. If you stray too far to the right, you end up in the severely sloped sandy rough. Laying back is no bargain either, as you wind up with a side-hill lie to an elevated and severely sloped green.

The bunkers guarding the front of the green on the left and right gobble up errant approaches, while the cross bunker 50 yards short of the green complicates any layup. Due to the steep tilt of the putting surface, there aren’t many viable pin positions, but the strategic challenges of the hole are boundless. In golf, there is no finer architect than nature.