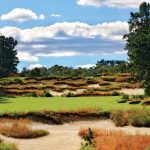 When Pine Valley Golf Club knows what it wants, it does not wait long to take action.

Two months after announcing it would open its doors to female membership, the venerated club has admitted Annika Sorenstam, Sarah Ingram and Meghan Stasi, per an email sent to members Friday morning by club president Jim Davis.

Sorenstam, whose game needs no introduction, is the biggest name of the three, widely regarded as one of the best female golfers of all-time with 10 career majors and a recent induction in the World Golf Hall of Fame. She continues to be deeply involved with the game, serving as the president of the International Golf Federation.

While the other two new members might not have dominated the pro game like Sorenstam, each has starred in her own corner of the game.

Ingram hails from Nashville, Tenn., and is a Tennessee Golf Hall of Fame inductee after a decorated amateur career that saw her compete in multiple Curtis Cups. She is currently the Curtis Cup captain for the American side.

Stasi is a New Jersey native and was a member of the 2008 Curtis Cup squad, which won the biennial match hosted that year at St. Andrews’ Old Course. She is a member of the Florida State Golf Association Hall of Fame.

On April 30, Pine Valley, which is home to the No. 1-ranked golf course in the world, announced internally that it wanted to land “on the right side of history,” and thus would hope to have its first female members accepted and introduced by the end of the year. Nine weeks later, here we are. The club also said it would remove any gender-specific language from its governing bylaws.