Golf’s traditions they are a changin’, if more gradually than some would like 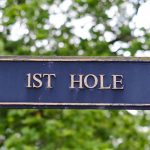 Golf doesn’t do social justice, or least not well. The game’s underlying value is more basic than even that rich two-word phrase. Golf bends toward the light of fair, toward do-the-right-thing. Every rules question ultimately goes to those two things. Broadly speaking, golf gets there — to fair — slowly, but it gets there.

On Friday, Pine Valley sent out a letter to its members announcing the club’s first three female members. Pine Valley was founded as a private men’s club in 1913. That was perfectly normal, then. All-male golf clubs were commonplace in American society, for many decades. Now they are not. Society and its values changed and its golf clubs have, too. Over time. Golf doesn’t rush.

Yes, four back-to-the-tee cart rides, once the playoff began, slowed things down. Still, the pace was painfully slow, especially on the greens. It’s not the fault of these two players. It’s the culture in which they were raised. They don’t know what our ancestors did: Golf is just not that important.

I predict, sometime in the next 100 or so years, the rules of golf will be changed, in the name of faster putting.

*Stripes will not be allowed on balls;

*Golfers will not be allowed to straddle their putting lines;

*Only brief ball-marking will be allowed, so that a soiled ball may be cleaned, unless a ball is in another player’s putting line.

*No repairs to the green will be allowed except for obvious ball indentations;

*In stroke play, the golfer who is putting will continue to putt until he or she or they finishes the hole.

Those handful of changes in the rules might sound like a wild segue from where we started today, nodding toward social justice. Au contraire, my good peeps. The nod to modern pronoun usage is more than window dressing. For one thing, the number of transgender golfers will only increase over time. (Welcome!)

A faster game is a more egalitarian game. Faster golf would encourage more people to play, from a wider variety of backgrounds.

Golf was never meant to be a leisure activity. It’s a rugged cross-country game. It requires hiking, bending, twisting, raking. Plus, you are your own grounds crew. Leave the course as good, if not better, than you found it, for the benefit of the golfers behind you. A foundation of fairness.

As Augusta National’s leadership looks to its founding fathers, Bob Jones and Cliff Roberts, for guidance, it always serves us well to look at how our forebears in Scotland played, and play, the game. The Old Course is a muni, you know. There are no truly private courses in Scotland. Every course there is open for outside play. The first shot at next year’s Open Championship, No. 150, at St. Andrews, will (he typed optimistically) the official end of this pandemic, golf-style.

Back to do the right thing. At the Detroit tournament this week, the Rocket Mortgage Classic, there was one spot reserved for a Black golfer. There was a special 36-hole qualifying event called the John Shippen National Invitational.

As a starting point, more people are now aware of this important name in golf history. Shippen was a slight, young Black teenager when he played in the second U.S. Open, held at Shinnecock Hills in 1896. His father was a minister at the neighboring Shinnecock Indian Reservation. Club members paid his entrance fee. When some players objected to his presence in the field, the USGA president, Theodore Havemeyer, said that the tournament would be called unless Shippen and his buddy Oscar Bunn, a Shinnecock Indian, played. Talk about doing the right thing.

A sponsor’s exemption is just that — the folks who put up the purse get a few spots for the players they choose. It happens every week. There is no question that this whole idea of reserving a spot in the Rocket Mortgage field for a Black golfer is noble in its intent. You can see the fingerprints of Dan Gilbert, an owner of the company and the owner of the Cleveland Cavaliers, right on the John Shippen Trophy.

I am completely in favor of doing what you can to correct historic wrongs, and the hardships that Black golfers have found in this game, on their way to the first tee, is revolting. I don’t think that reserving a place in a PGA Tour event on the basis of a player’s skin color does anything to either correct a historic wrong or to make the game better, despite the good intentions. But it’s not my tournament, not my money, not my logic at work here.

The history of law is filled with references to “reasonable men.” Reasonable men may differ. Now people say reasonable people may differ. Reasonable minds may differ. The old rule book used he in every example. Now it uses he and she. That usage will look dated before long, and to some it already does. (From the first page: For each stroke, the player plays the course as he or she finds it, and plays the ball as it lies.)

You don’t turn to golf looking for social justice. But fairness is at its core. The game has had far too many walls surrounding far too many first tees for far too long. As our guy said to their guy back in ‘87, “Mr. Gorbachev, tear down this wall!” Slowly — too slowly — they’re coming down.