Short and sweet: 25 sub-6,000-yard courses golfers are buzzing about

Arrowtown GC in New Zealand is a timeless treat.

With detailed input from GOLF’s 88-member Top 100 Courses ranking panel, its editors, architects from around the world and select other short-course aficionados, we’ve compiled GOLF’s first long look at “short courses,” including our inaugural ranking of the world’s 50 greatest 9-hole tracks, plus the 25 best sub-6,000-yard courses and 25 best par-3 courses. Because good things really do come in small packages.

Organized by distance, this category includes courses that fall in every 100-yard bucket, from 4,400 yards to 5,999 yards, with only a few exceptions. They fill a multitude of critical roles, none more important than as relaxed places to learn the game as well as to grow old with the spot. The courses are, by definition, more manageable in length. But that doesn’t mean they lack challenge.

“Short courses take risk, whether through accident, design or — most often — necessity,” says Scotland-based architect Clyde Johnson, about layouts pulled together by enterprising but, in many cases, comparatively anonymous course designers who “must use creativity and ingenuity to solve problems of compact acreage or unusual landscapes. Often what results is one-of-a-kind holes and a game unrestricted by convention. Golfers never know what’s coming next.”

And that’s just part of the pleasure. Eight years ago, as they were about to open Cabot Links, cofounders Ben Cowan-Dewar and Mike Keiser played the full-length course on a particularly windy day. Cowan-Dewar moved the two of them around the assortment of tees, and afterward Keiser remarked that he didn’t recall when he’d had so much fun under such trying conditions. He asked Cowan-Dewar how long the course had played that day and the final tally was 5,920 yards. Said Keiser: “Too bad so few golfers will knowingly play a course under 6,000 yards.” Amen.

Expert’s take: A golf experience of perfect pitch — 12 lovely and varied holes set on an island next to an island. A ferry ride from the long and winding road will take you to the mull of Kintyre and Machrihanish, the Holy Grail of short-course golf.

Expert’s take: Longest 4,049 yards anywhere and as tough a walk as you will find. Also perhaps Japan’s most exclusive club, with nothing over the top.

Expert’s take: Just minutes from downtown New Orleans, this miniature track is set in the shadow of hundred-year-old oaks and features all the best elements of southern golf at its finest.

Expert’s take: Originally a 9-hole layout built in the 1950s, the land upon which Goat Hill resides was once the first golf course in San Diego County. Today, its ocean views, slippery greens and commitment to fun make it one of the county’s best.

Expert’s take: There’s no way to describe Iona, it’s a course that must be seen. In a world where photos and video rule the web, you’ll be hard pressed to find any pictures of Iona Golf Course. And so much the better. Because those that take the leap of faith and visit the small island will be rewarded with one of the purest golf experiences in the world. Just a golfer, a ball, and 18 holes cut out next to the most idyllic setting in Scotland.

Expert’s take: Is this the best course in Scotland you’ve never heard of? You might be thinking we’re mad when you play the first three holes. But starting at the 4th, this is one of the most fun links courses you’ll find anywhere.

Expert’s take: The Mecca of golfing quirk, Painswick has it all in abundance. Here you’ll find a set of truly original golf holes, culminating with an unforgettable sequence set within and over the earthworks of an ancient hill fort. Henry Longhurst rated the 6th as one of the finest par-3s in England. Blind shots, shared fairways, ravines and quarries combine with some of the best panoramic views in England. It is spectacular and highly unusual, but also distinctly strategic. Once played, Painswick is never forgotten and always loved.

Expert’s take: A course set in a Victorian-era time warp, with a charming pavilion serving as a clubhouse. It heads directly uphill from the 1st tee with a series of par-3s to reach the high, moorland plateau on which the majority of the course is laid out, before inevitably tumbling spectacularly downwards again. Sheep and wild ponies freely roam the course and the views from the moorland heights over the Shropshire hills is well worth the climb.

Expert’s take: Golfers and geologists get a kick out of this spectacular clifftop course, built where the Scottish Highland Boundary Fault crashes into the North Sea. The 1st heads directly to the cliff edge, with the layout returning frequently to offer vertigo-inducing views of fabulous rock formations, huge breakers and even the occasional dolphin. Shots over deep ravines, blind par-3s and insanely cross-sloped fairways add up to an adventure far greater than the sum of its parts.

Expert’s take: About an hour’s drive from the Melbourne Sandbelt, Healesville oozes Alister MacKenzie despite being designed some 80 years after his famous visit to Australia on much heavier soil. Wildy undulating greens will test your imagination, several diagonal creek crossings will examine your strategy and shotmaking, while bunkers that make some sandbelt courses envious are a feast for the eyes.

Expert’s take: An exclusive club loaded with history including the Alister MacKenzie redesign in 1926 and Sam Snead’s first professional win in 1937. Claremont is tough due to the tree-lined fairways, plentiful bunkers and fast, sloping greens. Don’t let the length fool you!

Expert’s take: Let the other East Lothian giants attract the crowds, and instead head to the locals’ favourite, Kilspindie. A perfect links in miniature, this course will have you smiling the whole way round. Driveable 4s, wonky walls, and funny bounces. Kilspindie won’t beat you up, but it will likely renew your love of the game. Just be sure to wave to the seals as you walk by the beach on the 4th!

Expert’s take: A simple, fun, throwback little links course in natural linksland on the small island of Fanø situated on the west coast of Denmark. Perhaps one of the only true links courses in Scandinavia. A little well-hidden gem for golfers with affection for golf as it used to be.

Expert’s take: Opened in 1895 as a 9-hole course, Northeast Harbor survives some 125 years later as a 5,600-yard Herbert Strong design in which only one par-4 measures longer than 400 yards.

Expert’s take: Bamburgh Castle is a gem of a links course with stunning views of the sea. When the course is playing firm, as it normally does, the ground game can be just as imperative as the aerial one. Don’t get distracted by the views (and ancient castle looming in the background) for there are some seriously fun and challenging holes at Bamburgh Castle waiting to be tackled.

Expert’s take: Architect Komyo Ohtani was impressed by H.S. Colt’s designs in the UK, which served as the inspiration for Kawana. Ohtani gave each hole an interesting nickname. Case in point, No. 13 is a 286-yard downhill drivable par-4 named after Julius Caesar’s quote “Veni Vidi Vici,” or “I came, I saw, I conquered.”

Expert’s take: Alister MacKenzie is the architect of this wonderful inland course. While all the holes have some merit to them, the par-3 15th alone is worth the price of admission. A wonderful downhill shot is played to one of the most diabolical greens that can be found in the Isles. Don’t worry if you four-putt this green, you won’t be the first — or last!

Expert’s take: A true old-school European test, Welshpool GC was founded in 1929, but its history dates back to the late 19th-century. Golfers are greeted by a timeless test, rife with ditches, meandering greens and pot bunkers.

Golfers are greeted by a timeless test, rife with ditches, meandering greens and pot bunkers. Course rater on Welshpool GC 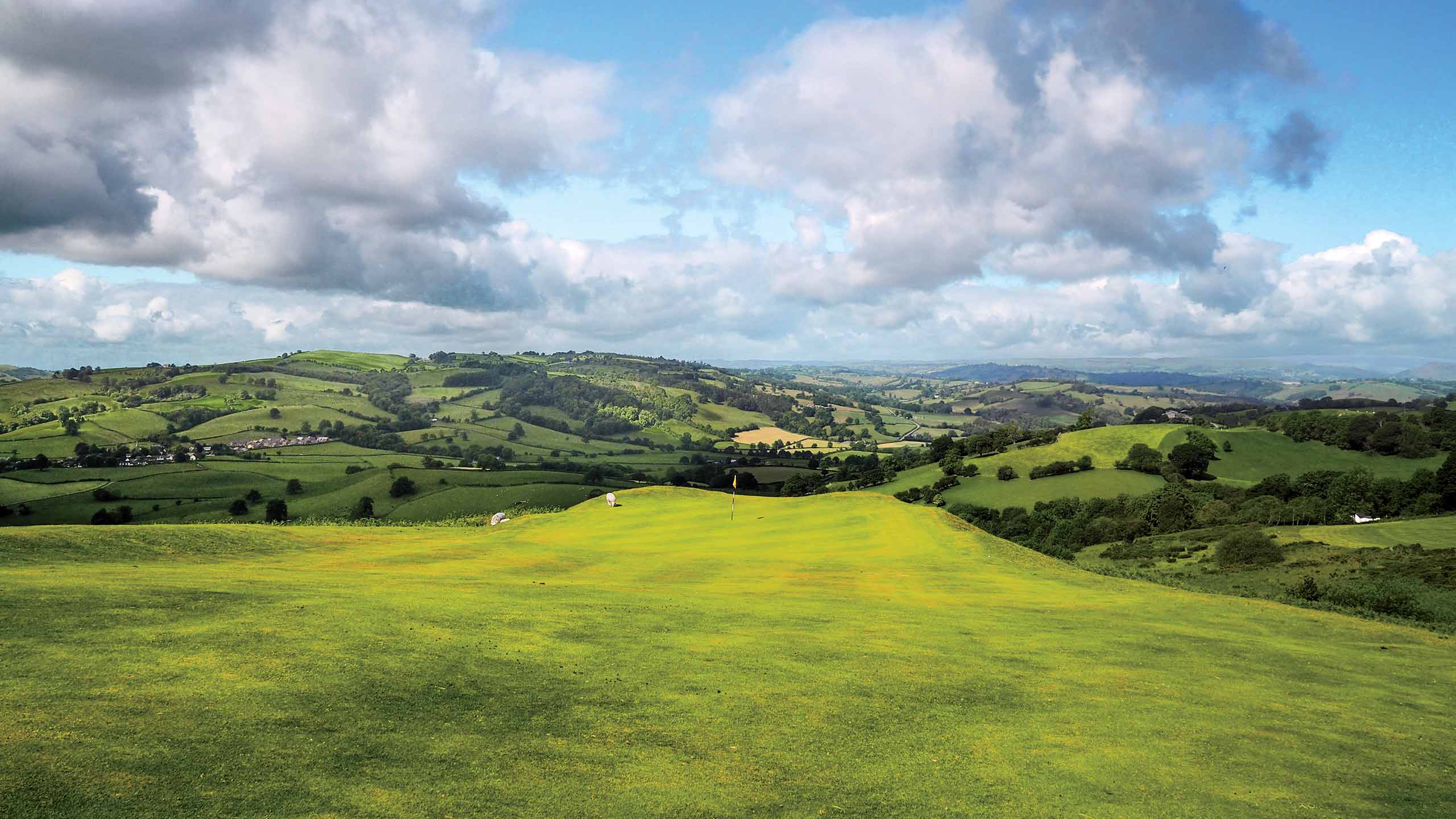 Expert’s take: This Walter Travis gem is as much fun as one could ever ask for — best sandwiched between robust New England pancakes and a beachside lobster clambake. If you don’t believe us, ask the Bush family, whose Walker’s Point estate is just minutes from Cape Arundel.

Expert’s take: A very sporty test across a complex routing. The course has a strong set of six one-shotters and a few half-par holes that keep interest throughout the round. Excellent bunkering.

Expert’s take: A golf course perfectly suited to the size of an island nation of only 364,000 people, Vestman Island is a course you have to see to believe. Set inside the bowl of an extinct volcano, the views from this golf course may be some of the best in the world.

Expert’s take: Not only a great short course. It’s one of the very best courses in New Zealand. Brilliant. Wild. And you can be a member for a year for $600, less than it costs for one game across the road at The Hills.

Expert’s take: A golf course built into the English countryside, you’d be hard-pressed to find a more jaw-droppingly beautiful test.

Expert’s take: A testimony to the fact that length and par is irrelevant when scenery and strategy combine as perfectly to offer golf this enjoyable. The layout swoops around, over and through the high ridges and deep furrows of an ancient glacial outwash plain. In its place have been colonised by the conifer trees and heather quintessential to the Highland golf experience. Heaven on Earth on a fine day.

Expert’s take: A stunning golf course in a fittingly stunning area, Princess Anne is a narrow, tricky and well-appointed test.