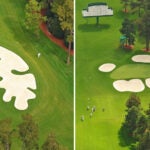 Augusta National opened up for member play on Monday, Oct. 12.

Monday marked the one month countdown to this year’s November Masters, which got golf’s hype train in full swing on social media. Nothing gets golf fans going like a Masters countdown.

But at Augusta National, the day represented another important milestone: Opening Day. In what has no doubt been one of the strangest years on record, golf’s most famous course appears to be opening right on schedule. Eureka Earth, which has been repeatedly zooming in on Augusta in recent weeks, posted a couple photos from Monday’s action, revealing a familiar sight: golfers and caddies walking that bright green, closely-mown acreage.

Some questions, then, with a few answers to accompany them:

When does Augusta National open for the season?

Well, in this case, we know the answer. Monday, October 12, 2020 marked the first full day of member play this season. That’s on track with a typical year; the course typically opens in mid-October, three or so weeks after a ryegrass overseed.

The first of Augusta National’s four big member events, the Opening Party, is typically held in October, and while we’re not sure there will be an Opening Party in its traditional form this year (they don’t tend to go public with those sorts of things) it appears that the course is very much open for play. Just not for you or me.

What does Augusta National look like over the summer?

If you’ve visited GOLF.com much in recent weeks, you already have your answer. In late summer, Augusta looks…brown! The bermuda fairways and rough go dormant and are eventually scalped, which leads to photos like Eureka took on Sept. 24, which reveal a closely-mown, browned-out golf course with bright green greens. Things change significantly from there.

How does it get so green?

It was happy timing for the folks at Eureka to fly over Augusta on Sept. 24, because it must have been only a couple days later that the rye overseed really began to take. In its next batch of photos, which came Oct. 3, the golf course appeared to have undergone a complete and total makeover. We dived into that process here, but some of the finer points:

-As fall approaches, the bermuda goes dormant brown, so Augusta’s turf team does a comprehensive scalp job, reducing that bermuda to just about nothing.

-The same turf team then follows with an aggressive overseed job, covering the fairways, second cuts, teeboxes — everywhere there will be grass in the tournament, besides the greens. Lots of watering, too.

How late will the members be allowed to play pre-Masters?

Again, this sort of information is disseminated on a bit more of a need-to-know basis, but if it’s anything like the Masters in April the membership will actually have access to the course until right up close to the event. Last year, our Sean Zak reported there was member play happening just behind the practice round for the Augusta National Women’s Am. There are only a few hundred members; we doubt they’ll tear the place up.

What else can we tell from these Opening Day photos?

Let’s get granular and make some very basic observations. There are players and there are caddies, and the caddies are carrying the players’ bags, which isn’t happening everywhere at the moment due to Covid restrictions. Everyone appears to be wearing long pants. The bunkers are looking properly white, filled with Augusta National’s famous “Spruce Pine Quartz.” They look well-raked. There are plenty of tire tracks visible from above, although you’d probably hardly notice them from on the ground. Both the group photographed on No. 3 tee (by No. 7 green) and the group on No. 10 are playing in foursomes. The caddies are in full uniform. The leaderboards are empty.