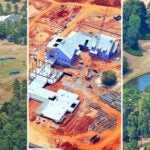 Augusta National undergoes plenty of changes in the months before the Masters — especially this year.

Avid GOLF.com readers learned, earlier this year, how the folks at Eureka Earth captured some incredible aerial shots of Augusta National during the 2019 Masters. Jack Nicklaus hitting the ceremonial tee shot? Patrons congregating by the iconic hand-filled leaderboard? Joe LaCava tossing a ball to his boss en route to a Sunday victory? They got ’em all from above.

But Eureka’s pilot-slash-aerial-imaging-specialist David Dobbins doesn’t just work during major championship weeks. He captured a few striking offseason photos of Augusta National this August and September, showing us a far different golf course than what we’re used to seeing on TV — and leaving me with five burning questions about the contents of the photos and the tournament we’ll see in six weeks.

1. When will the grass look more … green?

If I ever start pretending to be an agronomy expert in this space, feel free to barrage me with hate mail. But ever since April’s Masters got pushed, I’ve become far better acquainted with the phrase “bermuda scalping,” which is what Augusta does at the end of the summer to prep for its October opening — and in this case, its November Masters. Enter the photos:

As I understand it, the main turfgrass at Augusta is bermuda. Bermuda stops growing as nights get cooler at the end of the summer, at which point it goes dormant and turns brown, as we’ve seen in other aerial photos of the course over the years. Augusta National has very little interest in brown, dormant fairways, though, so they “scalp” the bermuda, cutting it down to nearly nothing.

Then the overseeding begins. (And it has begun!) That overseeded ryegrass is what produces that deep-green Augusta-in-April vibe, the kind that has changed golf course maintenance expectations everywhere, forever. Only time will tell whether or not November Green hits the same as it does in April, but we’ve got a feeling the ANGC crew will be working ’round the clock to get it damn close.

Oh, and why are the very-green greens so green? We can answer that. Those are Penn-A1 Bentgrass, which actually fare better during cooler weather — part of the reason the club is closed every May to October.

2. When will the trees look more … orange?

Look, we may only get one Fall Masters in our lifetimes, so if I get a little pumpkin-spiced-latte in my basic, shallow dreams for this special edition of golf’s biggest event, so be it.

Digging through old Augusta National photos, you can find a few in the fall that show off its colors, and they are glorious. I want a fall foliage Masters!

Rumors always swirl about the goings-on at Augusta, and one recent set — which include the fact that they’re trucking in new trees to serve as coloring specialists — reemphasize the fact that with this place, it’s very difficult to separate fact from wild speculation.

Here’s hoping Augusta leans into the fall spirit. While I don’t think we’re going to be seeing jack-o-lantern tee markers or cornucopia ensembles behind the 12th green, I bet we could see some turkey-themed sandwiches — for the lucky ones on site, at least. Lean in, guys!

Without any fans on site, I’m assuming that Augusta won’t be erecting any bleachers. What will that mean? Specifically I’m wondering about a potentially massive turning point in the round — the 15th green and the adjacent par-3 16th. Normally there are bleachers and oodles of fans in the space between holes, but that obviously won’t be the case this year. Check out just how close these are:

Look, players in contention on these holes always have a sense of what’s going on around them thanks to Augusta’s famous roars. But without the roars, and without the bleachers, I’m curious if the players will have their heads on a swivel, looking for who’s making birdies and who’s getting into trouble.

In recent years, this is an evergreen question. What is up with No. 13? Here’s what we know:

The tee box is green — the only area on the course that seems fully greened out.

The much-speculated way-back new tee doesn’t exist (yet). But the service road behind the newly-purchased land behind the tee does exist. (Click the right arrow on the below Instagram to see the road.)

I mean, wow — check out the landscaping job behind that access road, too. Last Masters, I took a jog through a nearby cemetery, which just about gets you a glimpse at Amen Corner. (It’s a scenic cemetery! This isn’t as weird as it sounds, I promise.) That view must now be extra-obstructed, just the way they like it.

5. What’s the deal with the new ANGC Global Broadcast Village?

The Global Broadcast Village was touted last year by chairman Fred Ridley as “a new television and digital compound” and “a pathway to the future” as Augusta continues to break new ground on delivering the coverage goods. Oh, and there’s a tunnel involved under Washington Road, too. That’s all we know for now, plus this picture from Eureka, which shows a large compound, a large crane and a large quantity of building materials. Augusta National tends to do things big.

Other questions remain, too, like what the weather will be, how the course will play and how any of this will affect Bryson DeChambeau’s plan to dismantle the golf course regardless. But hey, we’re only six weeks out — we’ll see soon enough.