How Augusta National transformed seemingly overnight, according to an expert 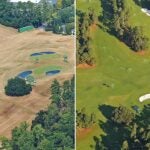 The area around Augusta National's 9th and 18th greens, as captured recently by pilot David Dobbins.

Welcome to Super Secrets, where we pick the brains of the game’s leading superintendents. By illuminating how course maintenance crews ply their trades, we’re hopeful we can not only give you a deeper appreciation for the important, innovative work they do but also provide you with maintenance tips that you can apply to your own little patch of paradise. Happy gardening!

In a recent series of aerial photos, snapped within a roughly 10-day span, the golf world witnessed a dramatic transformation, as Augusta National morphed from a starkly browned-out state, its fairways the color of the Mojave, into something closer to the course we know, its grounds a vibrant Masters green.

The conversion was so striking, it almost seemed like magic.

But with all due respect to the otherworldly powers of the green jackets, there was nothing wizardly about it.

The morph was the result of pretty basic agronomic science, and part of an annual maintenance practice carried out at many courses across the South.

So, how, exactly, does it all go down?

As the vice president of agronomy at Reynolds Lake Oconee, a luxury golf resort about an hour west of Augusta, Lane Singleton isn’t privy to what’s happening on the business end of Magnolia Lane, so he can’t speak to specific Masters preparations.

But he is well versed in how courses around the region go from brown to green. Here’s his overview.

As fall approaches, warm-weather grasses like Bermuda — the primary turf at Augusta — do like grizzly bears at hibernation: they go dormant. Because brown, slumbering grass isn’t great to look at or to play on, many courses (usually in September or early October), overseed with ryegrass, a cool-season turf that provides a beautiful playing surface throughout the autumn, winter and spring.

Before overseeding, some courses take the additional step of scalping the Bermuda, cutting it down to next-to-nothing. One reason to scalp, Singleton says, is that “it opens up the turf and gives those ryegrass seeds a better chance to settle in.”

At Reynolds Lake Oconee, Singleton and his crew don’t do much scalping, which injures the turf. As a year-round operation, they want their Bermuda to be healthy and raring to go the following summer, when they transition back out of ryegrass.

At courses that close in the summer, like Augusta, this is not an issue. They can scalp to their heart’s delight, without worrying about the state of their Bermuda when the warm weather returns. The aerial photos of Augusta that appeared late last month showed its fairways scalped and brown and bare.

Not all courses overseed in the same way. At Reynolds Lake Oconee, Singleton and his crew apply 450 to 500 pounds of ryegrass seed per acre. Some properties overseed more heavily, with consequences that cut two ways. On the one hand, heavier overseeding produces a lusher layer of cool-season ryegrass. On the other, that thick layer makes it more challenging for the Bermuda grass to reassert itself the following year.

“It creates more competition,” Singleton says. “Everything is fighting for the same thing.”

As with scalping, this is not an issue with courses that shut down in the summer; the battle for resources is moot.

No matter how much ryegrass seed goes down, once it’s in the ground, it needs water. Lots of water. Especially in the early goings, as the turf-to-be is starting to take root. (If you look closely at the image of green Augusta above, you can see an army of sprinklers dousing the course.)

“We want to keep that seed covered in moisture until it pops with color,” Singleton says.

Exactly how long that takes depends on a few factors, including the temperature of the soil and air. But it usually happens within three to seven days: each ryegrass seedling sprouts a verdant shoot, and — abracadabra, as the golf world saw in those bird’s-eye photos — the landscape comes alive in green.