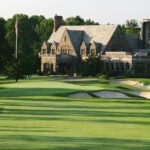 A view of the Winged Foot clubhouse.

The 120th U.S. Open Championship gets underway this week at Winged Foot Golf Club, a private facility in Mamaroneck, N.Y., a leafy suburb just north of Manhattan. Winged Foot is home to two 18-hole layouts, the East Course and the West Course, both designed by A.W. Tillinghast, a giant of golf architecture’s Golden Age.

The West Course, the stage for this year’s event, has hosted the U.S. Open five times before. That includes the Massacre at Winged Foot, which Hale Irwin won in 1974, and what we might describe as the Massacre of Mickelson, which took place in 2006. But these are all details Wikipedia could tell you.

In the interest of deepening your Winged Foot education, here are eight other things about the club you might not know.

1. It was the site of the most lopsided win in major history

In 1929, when Winged Foot hosted its first U.S. Open, the event produced a playoff, but it was not a nail-biter by any means. In 36 extra holes, Bobby Jones edged Al Espinosa by 23 shots. That is not a typo. Twenty-three shots. It remains the largest margin of victory ever in a major.

2. There’s a time capsule buried in the cornerstone of the clubhouse

In case you’re trying to locate the original plans for Winged Foot, we know where to find them. But we can’t promise you can get a look. In 1923, at a ceremony marking the laying of the cornerstone of the clubhouse, a capsule was buried in the cornerstone itself. Inside the capsule was a bottle of whiskey, a copy of that day’s local newspaper and the architect A.W. Tillinghast’s original plans for the course. With the club’s centennial approaching in 2021, there is talk at Winged Foot of digging out that capsule and bringing its contents into the light of day.

Unless you were in diapers when it happened, you probably recall that in 2006, the last time the U.S. Open was held at Winged Foot, Phil Mickelson imploded on the 18th hole to lose his grip on the one major championship that still eludes him. In the wake of that disaster, a shell-shocked Lefty fielded questions from the press, then made his way off to lick his wounds. As the story goes, though, Mickelson was just about to exit the grounds when he remembered that he had failed to tip the clubhouse attendants. So he wheeled around and drove back to dole out some greenbacks. That’s the yarn they tell around Winged Foot these days. And though the details are difficult to confirm, the anecdote itself sounds very much on brand.

The most infamous scoring error in major championship golf took place at the 1968 Masters, where Roberto “What a stupid I am” De Vincenzo was disqualified after signing an incorrect final-round scorecard. But 11 years before that, a similar snafu took place at Winged Foot, when Jackie Pung lost her claim to the U.S. Women’s Open title after committing a comparable mistake. While you’re pondering Pung’s misfortune, here’s a happier bit of trivia to chew on. In 1980, when the U.S. Senior Open Championship came to Winged Foot, none other than De Vincenzo won by four.

5. Butch’s dad holds the course record on both courses

In addition to being Butch Harmon’s father and the winner of the 1948 Masters, Claude Harmon was the head professional at Winged Foot from 1945 to 1978. During his tenure, Harmon notched the same course record on both courses: 61. He pulled off the feat just once on the more difficult West Course, just weeks before the 1959 U.S. Open. On the East Course, though, he shot 61 twice. On the second occasion, Harmon was 10 under over a span of nine holes, a torrid stretch that included an eagle on the par-5 4th, which he reached by hitting driver twice. For good measure, Harmon tapped in the putt with driver, too.

The greens at Winged Foot are notoriously fierce, but at the 1959 U.S. Open, Billy Casper proved they could be tamed. In one of the greatest showings with the flatstick Winged Foot has ever seen, Casper played four rounds on the lightning-quick surfaces with just a single three-putt. At the end of the third round, he closed with four consecutive one-putts, then opened the final round with five more. All of those one-putts were for par or birdie, and none from tap-in range.

Beside the tee box of the par-3 10th hole on the West Course is a plaque paying tribute to the late Tom Nieporte, a PGA Tour player who succeeded Claude Harmon as Winged Foot’s head professional. For the membership, the 10th has traditionally tipped out at 190 yards, but Nieporte always wanted a permanent tee installed farther back, closer to 220 yards. Though Nieporte never got to see that tee get built, it has now been completed, in time to be used for this year’s competition. Plans are in the works to relocate Nieporte’s plaque to that back location. In the meantime, though, Winged Foot members already have a name for the new back box. They’ve been calling it “Tom’s Tee.”

8. A Winged Foot member played more courses than anyone you know

One of Winged Foot’s founding members was an amiable golf addict named Ralph Kennedy, who at one point held the record for having played more courses than anyone on earth. You can learn more about him if you ever get a tour of Winged Foot’s clubhouse, where mementos to his life in golf are on display. As of 1955, long before the era of remote golf excursions, Kennedy had made the rounds at upwards of 3,600 courses on six continents, and he kept a scorecard for each of them, signed in every instance by the club’s head pro.