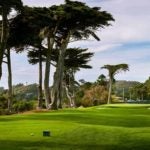 TPC Harding Park in San Francisco is one of many major venues you can play.

The staging of this week’s major at TPC Harding Park in San Francisco, Calif., marks the fourth time a municipally-owned course will host the pros for a PGA Championship.

That means there’s now one more publicly accessible, major-championship course that recreational golfers can actually play. The best part? You can get a tee time at TPC Harding Park for under $100!

It turns out, there are plenty of other courses that have hosted major championships that can also be played for the bargain price. Check out the full list of major championship venues that you can play for less than $100 below.

The brawny, two-time U.S. Open host, and 2019 PGA Championship venue — is a smokin’ deal, but unfortunately, you have to be a New York state resident to enjoy a weekday rate of only $65. For out-of-staters, it’s $130.

Like Bethpage, Torrey Pines, host of the 2008 U.S. Open, offers a sweet discount for its locals. San Diego city residents can snag a weekday tee time for $63, while everyone else must pay $202.

The 1942 PGA Championship was played at what was then Seaview Country Club. Those holes now comprise the Bay and Pines courses, each of which can be played for various rates under $100.

During the PGA Championship’s matchplay heyday, Paul Runyan won at Shawnee. There are three nines on offer, and while a certain nine can’t be guaranteed at the time of booking, a weekday tee time is easily gettable for $75.

Weekday rates are only $49 at this 1974 PGA Championship venue, where Lee Trevino raised the trophy.

Though residents get a bit of a break on green fees at this 1926 PGA Championship venue, anyone can get a tee time here for between $42 and $70.

In the weeks following this year’s PGA Championship, lucky residents of San Francisco can play TPC Harding Park for only $80! For the rest of us, it’s $200-$300.

*Note: Belmont Golf Course in Richmond, Va., hosted the 1949 PGA Championship and would appear on this list; however, the course closed on January 1, 2020, to undergo a comprehensive redesign and renovation. A reopening is planned for May 2021.