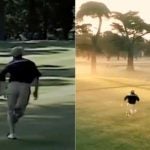 A young Sergio Garcia pictured in the recently-released hype video for the 2020 PGA Championship.

It’s been a long, long time since we’ve seen live, major-championship action in golf. But that lengthy wait is about to end in two weeks when the rescheduled 2020 PGA Championship begins at TPC Harding Park in San Francisco.

With the tournament representing the first men’s major in more than a year, the PGA of America released a hype video to help get everyone excited. And whether you need a little more inspiration to get in the major mood, or you’re among the hordes of golf fans already itching for their return, it’s well worth a watch.

Why? Because of the ingenious way the video was created.

The 1:00-minute long spot opens with a reel of iconic moments from PGA Championships past, along with the tag line “Major Championship Golf is Back.” But around the :30-second mark, something changes.

The change begins with a memorable clip from the 1999 PGA Championship, where 19-year-old Sergio Garcia hits a shot from behind a tree and chases after it down the 16th fairway at Medinah. But after Sergio begins his chase, the scene shifts, and instead of a spectator-choked Medinah, young Sergio can be seen running up a lonely, empty fairway at TPC Harding Park.

In case you haven’t heard, no fans will be permitted at Harding Park for the PGA due to the Covid-19 pandemic, as has been the case on the PGA Tour since play returned in June. So the second clip of Sergio more closely matches what fans will see on TV this year.

More digitally altered clips follow. Tiger Woods is shown hitting an approach shot into an empty Harding Park green, Jason Day celebrates his 2015 PGA win with a double fist-pump, Justin Thomas rolls in a long putt, and Brooks Koepka can be seen fist-pumping his way to the 2019 PGA title, all of which are superimposed on an eerily empty Harding Park.