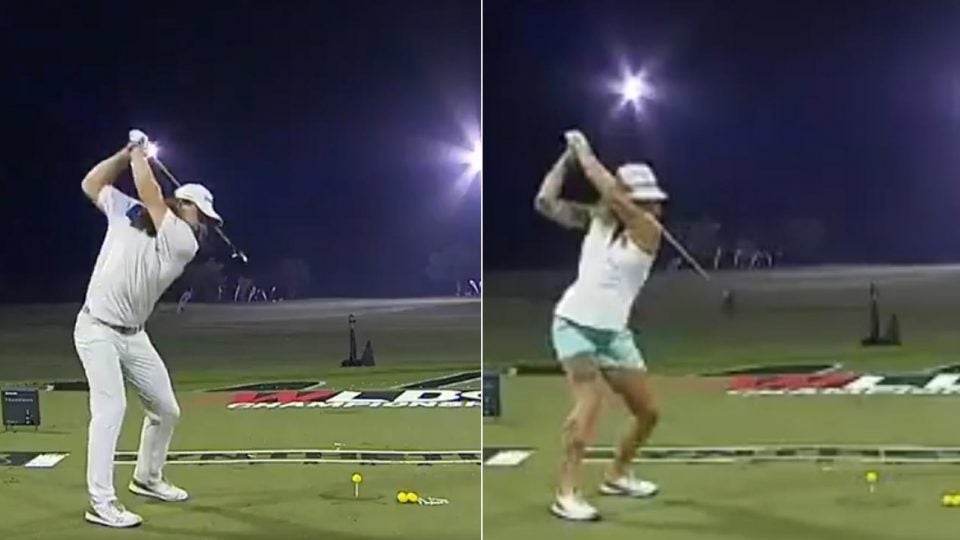 Scroll down to watch the two drives that won the 2019 World Long Drive Championship.
@WorldLongDrive on Twitter

The longest drivers in the world descended on Thackerville, Okla., this week for the season-ending 2019 World Long Drive Championship. Wednesday night hosted the semifinals and the finals in both the Open division and the Women’s division, and it didn’t disappoint.

You can check out all of the absurdly long winning drives below.

The final of the Open division at the World Long Drive Championship featured the tour’s top-ranked players: World No. 1 Kyle Berkshire and World No. 2 Tim Burke, a two-time champion.

Burke defeated Emil Rosberg in his semifinal match when his 398-yard blast crushed Rosberg’s own 380-yard drive. Here’s the drive that got Burke into the final:

Berkshire had a more difficult path to the final. His opponent, Jordan Brooks, knocked a 400-yard drive in the semifinals. But it wasn’t enough to contain Berkshire, whose monster shot carried Brooks’ ball in the air, finishing well beyond.

FOUR HUNDRED IN THE AIR! @KyleBerkshire just flew his opponent to advance to the #WorldLongDrive Championship Final! pic.twitter.com/SNS7v7FEBH

That set up the high-octane final with the two best drivers in the game battling for the title. But the veteran Burke was no match for 22-year-old Berkshire, who had fought off cheating accusations the day before. The best qualifying drive Burke hit went 374 yards, which Berkshire easily bested with a 407-yard championship-winning smash. Check it out below.

In the women’s division, South African Chloe Garner took on New Zealand’s Phillis Meti. You can take a look at the powerful swing that put Meti in the finals below.

The strong swing of @PhillisMeti is advancing to the finals at the #WorldLongDrive Championship pic.twitter.com/3hLpvbmw3C

In the other semifinal, Garner launched an impressive 346-yard drive to win and advance.

Chloe Garner is one round away from taking home the #WorldLongDrive Championship belt pic.twitter.com/tTf03ObKnc

Meti had the honors in the final, and she didn’t back down from the moment, smashing a 344-yard drive to give herself a chance at the title. But it would prove to be just short of what she needed. Garner’s fifth drive soared down the grid, landing and then bouncing past Meti’s ball to clinch the victory.

If you’re jealous of the immense power on display in this competition, do as one of our writers did, and take a lesson from a Long Drive star to start launching 300-yard bombs at your home course.