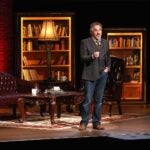 'Feherty' will not return to Golf Channel after 10 seasons.

How wide is the gap between genius and insanity? For David Feherty, it is roughly the length of a golf tee.

In 2012, the golfer-turned-broadcaster-turned-comedian was shooting footage with John Daly for an episode of Feherty when the former Open champ presented a peculiar offer.

“If you lay down and put a tee in your mouth, I could hit it off you,” Daly said, clutching his driver.

“Let’s not do anything stupid here,” a producer contested off-camera.

It was too late. Feherty — clad in dress shirt and waistcoat — had already plopped onto the ground.

Slowly, Feherty lodged the tee between his teeth and placed a ball upon it.

“Believe it or not, in the moment, this seemed like a good idea,” he said later. “What could possibly go wrong?”

“Guys, let’s not do this,” the producer pleaded again.

“Just keep your eyes closed,” Daly said, waggling his driver. “It’s only going to hurt for a minute.”

Feherty leapt to his feet unscathed.

It was a moment of comedic absurdity borne seemingly of utter chaos. In other words, it was quintessential Feherty.

Nearly a decade after Daly’s drive, Feherty is no more. The show’s star announced Friday that Golf Channel would not be picking up an 11th season as part of a broader restructuring within the company.

“Hey Fehertwits,” Feherty wrote in a tweet. “Thank you for an amazing reaction since my show has ended. The last ten years have been a dream, thanks to the incredible people who agreed to be on this show, and all the men and women from NBC/Golf Channel. Stay tuned, you never know what might show up!”

The announcement marks the end of one of Golf Channel’s finest (and most popular) shows — a sad reality for a network in the midst of a historic upheaval from former company headquarters in Orlando to NBCUniversal’s home in Stamford, Conn. It is also a sad reality for golf fans, whose dwindling supply of pre-produced, linear television entertainment grew one show thinner with the announcement.

Feherty was, at its core, everything television executives should hope to find in an hourly, serial show. It was authentic, amusing, and unafraid to wrangle with conversations that strayed into unusual, even serious directions.

Thanks in no small part to its host’s bulky Rolodex, Feherty also proved an unwitting ambassador for the game of golf to the sporting public. Figures like Charles Barkley, Scott Van Pelt and even President Trump blurred the sport’s boundaries and introduced scores of “casual fans” to its most entertaining characters. And who better to steward a new generation of fans than Feherty, a figure embraced by both the game’s counter-culture and its most ardent traditionalists?

For 10 seasons, Feherty was, as he usually is, at the center of the story. Self-effacing, earnest, and often hilarious, he effortlessly (perhaps even unintentionally) fit the mold of “personality-driven” content — a buzzword of particular affection among media types.

When the pandemic ground the golf world to a halt in the spring of 2020, there was Feherty, digging into interviews for the show’s “Up Close from a Distance” web series. There would be no tee between his incisors, but that wouldn’t matter, Zoom proved amply capable of capturing Feherty’s trademark wit and warmth.

“I think I’m just so screwed up that crowds aren’t intimidated by me at all,” he told HBO’s Real Sports in 2016. “They feel sort of comfortable.”

Whatever the reason, Feherty cut to the heart of what serialized sports TV should feel like: a conversation between friends about a mutual passion. Feherty’s instinct for human connection made him a beloved on-course reporter, but it also helped craft his show’s tone — sharp but friendly, a talk show for sports fans.

No show can deliver on all of these promises, but the good ones don’t try. They are genuinely, utterly themselves, even if it means catching John Daly’s driver to the jaw in the process.

“The first thing I want to be is informative, and then entertaining, about golf,” Feherty told GOLF in 2016. “That’s what I do. That’s job one. Anything beyond that would be gravy.”

Kudos to Feherty on 10 seasons of gravy.