How has Tiger Woods’ swing changed since his accident? Here are 4 key differences 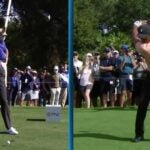 Tiger Woods is back at the PNC Championship, but his swing is a bit different since the last time we saw him.

When news of Tiger Woods’ horrific car accident broke earlier this year, there were legitimate questions as to whether he’d ever be able to play golf competitively again. The accident was so serious that just hours after he was pulled from the mangled wreckage, there was a possibility he would lose his right leg.

But just 10 months later, the 15-time major winner is back on the course, smashing drives and flagging irons. Woods has made many comebacks throughout his career, but his journey back to the PNC Championship to play alongside his son, Charlie, is easily the most impressive.

“We worked every day,” Woods said. “Even days where I didn’t feel very good, we still worked on something. So every day, there was never a day off the entire time other than those three months in bed. I haven’t taken a day off.”

The earlier-than-expected comeback has delighted golf fans, with galleries lining the ropes in Orlando like it’s a major championship and media outlets covering the 15-time major champion’s every move.

While seeing Woods out and competing again is a delight, things aren’t all normal. There’s a slight limp in his step as he treks around the Ritz-Carlton Golf Club, and he’ll be the first to tell you he’s still a way off from getting back to the Tour.

“It’s frustrating when I don’t hit the ball as far as I know that I can and the shots that I see don’t come off the way I want,” he said. “If I want to compete out here at the Tour level, I’m going to have to get the endurance back and hit thousands upon thousands of golf balls. [It] just takes time.”

The lingering effects of his car accident might not be enough to keep him from teeing it up at the PNC Championship, but his swing is not where it needs to be if he aspires to claim another green jacket.

The differences in Woods’ swing are subtle, but if you look closely enough, you can see where his new moves differ from those of old. During the NBC broadcast on Sunday, analyst Gary Koch broke down Woods’ swing from last year versus his swing from this year.

Here are the four biggest changes to Woods’ swing year over year.

The first change Koch pointed out was some additional flaring to Woods’ left foot in the setup. With his toes pointed a little more toward the target, he’s able to put himself in position to clear his hips easier with a slower swing speed.

Woods also has a shorter backswing in his current-day swing. With his right leg having taken serious damage in the car accident, it likely makes it harder to turn as far back on it at the top of the backswing. Additionally, taking so many months off in 2021 probably deceased his flexibility.

3. Right heel down at impact

At impact, Woods has his right foot noticeably more on the ground than he was last year. Pushing off the injured leg is yet again the cause of this.

“The heel is not nearly as far off the ground,” Koch said.

The biggest difference in Woods’ swing, though, is how limited he is on the follow-through. As you can see in the picture above, he is not nearly as far onto his front side by the end of his swing.

“He’s not getting over to the front side quite as quickly, and it is very evident in the follow-through,” Koch said. “Much different how he’s able to get around to the left. Easier last year than this year. Not surprising at all considering the injuries he’s sustained to the lower part of the right leg.”