Largest purse in long-drive history finally gets paid out: ‘Better late than never’ 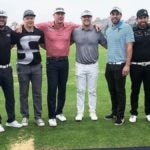 Wes Patterson, in gray shirt, with his fellow competitors in China. The tournament promised a record $400,000 purse.

Like a lot people who hit golf balls for a living, professional long drivers have been out of luck of late.

Official competitions have been postponed or cancelled. So have corporate outings and charity events, which many long drivers rely on to supplement their incomes.

A tough sport in which to earn a living has gotten even tougher.

But in otherwise lean times, there is some good news: This past month, the last of the long overdue winnings from what was the largest unpaid purse in the history of the sport were finally paid in full. The payments put a close to a strange and drawn-out saga that roiled a close-knit sport for well over a year.

Fernandes was among the dozens of top long drivers, male and female, who flew to China in November 2018, to compete in the kickoff tournament of the Global Infinity Series, paying the $2,500 entrance fee for a spot in an event that organizers hailed as having “the biggest prize pool in the history of the sport,” with a total purse of $400,000. The first-prize payout alone — $150,000 — was more than most successful long drivers win on the grid in a year.

Almost as soon as they arrived in China, though, competitors noticed worrisome signs. At the host site, Mission Hills, a 10-course golf resort on China’s Hainan Island, little in the way of tournament infrastructure was ready. Not even a hitting grid had been reserved.

After a last-minute scramble, a modified version of the tournament wound up taking place.

But afterward, no prize money was paid. In lieu of checks, the company behind the event — International Golf Associates of New Zealand, or IGANZ — handed out IOU’s.

At long-drive competitions, it is not unheard of for winners’ checks to take days, if not weeks, to get issued. But in the wake of the Global Infinity event, months went by without payments.

On more than one occasion, IGANZ founding director Olna Ford sent competitors written promises that the money was coming. When it didn’t show, and a few players groused, Ford warned them that making a stink would jeopardize their chance of getting paid. Their complaints, she cautioned, risked scaring off the sponsors who were putting up the purse.

If that sounded like a paradox — don’t complain about not getting paid or you won’t get paid — it was persuasive.
For the most part, competitors heeded Ford’s warning, stewing quietly instead of speaking out.

Among them was Wes Patterson, a Florida-based long driver who had won the men’s division in the China event, earning a promised payday of $150,000.

Eight months passed without Patterson getting paid. The same was true of every other competitor who had finished in the money. Not a dime was paid.

Finally, last summer, having spent thousands of dollars on attorney fees in an unsuccessful attempt to get what he was owed, Patterson grew weary of keeping mum and told his story to GOLF.com.

Not all of his peers were pleased. Though Patterson says that most of his fellow long drivers were supportive, a handful rebuked him for speaking out. Some echoed Ford’s argument — that by making noise, Patterson was putting eventual payment for everyone at risk. Others worried that calling attention to an event gone sour would give the sport of long drive a black eye. This is a common refrain in long drive, one that has kept competitors silent in the past when faced with unpaid purses.

For Patterson, the criticism added to the stress of a trying time. An amiable former collegiate baseball player, Patterson has struggled with anxiety throughout his career, and the financial and mental strains that came in the wake of the China event wore heavily on him.

“All of that stuff just kind of put me over the edge throughout (the 2019 season),” Patterson said. “There were a lot of sleepless nights.”

In August 2019, GOLF.com ran a story on the China event, drawing on input from Patterson and nearly a dozen other long drivers. The next month, IGANZ paid Patterson, though Ford said that the payment had not been prompted by the negative publicity. She’d been planning to pay all along, she said.

Why did it take so long?

Ford attributed the lag to a tangle of problems, which had prompted her investors to withdraw their support and forced her to find other ways to make the payouts. In the end, Ford said in an email to GOLF.com, she had raised the money by refinancing five properties in New Zealand and selling another.

In the weeks and months after making Patterson whole, IGANZ continued parceling out payments. Eddie Fernandes, who’d finished in the money in both the men’s and senior men’s division of the China competition, received the $9,000 he was owed in January. Another competitor, Justin James, was paid the $3,000 he was owed in the third week of March. His was among the last of the outstanding payments.

On Twitter, a former long drive competitor who posts anonymously under the handle Long Drive Sheriff celebrated by dispatching a meme of cash being disbursed.

“Sheriff is happy to report that @IGANZlongdrive has paid all of the players that were owed,” the post read.

Other long drivers were pleased as well, and relieved to have the matter finally behind them.

“Olna deserves credit for making good, not the tournament,” Fernandes said. “She could have just wrote it off. Instead she took the high road.”

Justin James, for his part, said he was still just trying to make sense of it all.

“I think we’re all surprised to have gotten paid,” he said. “The whole thing is still shockingly bizarre. Weirdest thing I’ve ever been a part of.”