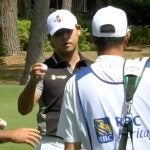 Si Woo Kim missed a birdie putt by about 45 seconds.

Not by an inch or two. His ball would arrive at its bottom-of-the-cup destination during Saturday’s third round of the RBC Heritage. It just showed up late.

Kim, on the 476-yard, par-4 2nd at Harbour Town Golf Links, putted from just past the green with his third shot. The ball went up an upslope, went down as it rolled onto the green, then curled left to right as it inched toward the hole. It would stop possibly a tenth of an inch short. Maybe less.

“I agree. No way,” an announcer on the PGA Tour Live broadcast said.

“So close,” another announcer said.

Kim would walk over to his ball and lean over to see just how close. So close. He walked over to the other side of the cup. His playing partner, Matt Kuchar, came over to get a look. The caddies would come in. Kim squatted over and stared at it. And, finally, after about 55 seconds, someone in the now circle around the hole shouted.

Kim laughed. Kuchar laughed. The gallery would cheer. Unlike the ball on the edge of the cup, the happiness wouldn’t last long.

According to rule 13.3a, “the player is allowed a reasonable time to reach the hole and 10 more seconds to wait to see whether the ball will fall into the hole.” Since Kim was over that allotment by about three-quarters of a minute, “the player has holed out with the previous stroke, but gets one penalty stroke added to the score for the hole.”

Rules official Stephen Cox would come over. Kuchar would argue that he saw the ball moving after it reached the hole, then asked: “You can’t hit a moving ball, correct?”

“But in this situation, the rules are modified because you could argue that there comes a point in time that we’ve got to play that golf ball,” Cox said. “And that’s why you put that time limit on it.”

“I was certain it was — well certainly I’m wrong,” Kuchar said.

Kim’s birdie 3 became a par 4, though Cox said he and officials would review it over video. Kim didn’t seem too concerned. On the next hole, the 194-yard, par-3 4th, he dropped a 43-footer for birdie — and it fell as soon it reached the cup.

“Well there you go,” an announcer said on the PGA Tour Live broadcast. “Don’t have to wait for that one to go in. I would say he deserved that.”