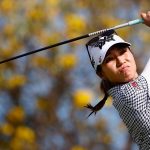 Lydia Ko hits her tee shot on Saturday on the 14th hole at Kapolei Golf Club.

Check in every week for the unfiltered opinions of our writers and editors as they break down the hottest topics in the sport, and join the conversation by tweeting us @golf_com. This week, we discuss Lydia Ko’s breakthrough victory, Stewart Cink’s renaissance, arm-lock putting grips, putting penalties and more.

1. Lydia Ko snapped a nearly three-year winless drought with a convincing victory at the Lotte Championship on Saturday night, and over her past 90 holes, she’s now a whopping 38-under par. Analyst Karen Stupples said on the Golf Channel broadcast that this revamped version of Ko, who is 23, could be the best one yet. What do you think? Is the 16-time winner at the beginning of another run of dominance?

Michael Bamberger, senior writer: I think the game has changed in the past half-decade, from what I have seen, where it favors bashers more than ever. I don’t see Lydia ever being that kind of player. So not likely. But great to see her win again!

Josh Sens, senior writer (@JoshSens): Both things can be true. She might be, as Stupples says, the best version of Lydia so far. But that doesn’t mean she’s going to dominate again. She will win again. But the women’s game is no different than the men’s game. For the shorter hitters to dominate, everything has to be clicking all the more. Which is a long ask in the age of the long ball.

Dylan Dethier, senior writer (@dylan_dethier): Domination looks more elusive than ever in both the men’s and women’s game. But this win seems like it should help cement Ko’s status at the top of the game. She’s been among the best golfers in the world since golf returned post-hiatus last summer — and now she has the trophy to prove it. That means good things for Ko and good things for the golf world.

Nick Piastowski, senior editor (@nickpia): Those five rounds and, as Dylan mentioned, her overall recent play are pretty difficult to make such a conclusion, but, you know what, I’m in. She’s tinkered to add a little necessary power to her game, and when you combine that with her championship know-how, watch out.

2. Stewart Cink continued his renaissance at 47, winning the RBC Heritage by four shots. The victory comes on the heels of his win last September at the Safeway, his first win since 2009. What has Cink discovered that is allowing him to beat players half his age?

Bamberger: He has a long, rhythmic, simple swing that has never changed, not that I can tell. So he waits for good putting weeks. When they come, he can top-10. Sometimes when he top-10s, he top-ones.

Sens: The swing really does look unchanged. What has changed is his caddie. There’s got to be something in that father-son connection that has helped Cink tap the psychological Fountain of Youth.

Dethier: When he’s playing well, he swings with such conviction. Maybe that’s the trust of having Reagan on the bag. Maybe it’s the feeling that he’s playing with house money. Maybe it’s the strategy he’s worked out with his team on choosing the smartest line with every shot. He’s simplified his decision-making, and his execution has followed.

Piastowski: He just looks like he’s having fun out there. That tends to lead to good play, no matter the age.

3. Billy Horschel, after the first round of the RBC, called for a ban on the arm-lock putting technique that has gained favor recently among pros. When arm-locking, players pin the grip of their putters against their forearms, which Horschel argued is, in essence, anchoring — and illegal under the rules. “I think when you look at what guys are doing now with the arm-lock and moving the grips to the side where it’s parallel or matches the face and then when you do that up against your arm, I mean, it’s — you know, that face is dead square and that face doesn’t rotate at all,” Horschel said. “It’s just sort of locked in. Guys are doing it too good.” Is Horschel on to something here?

Bamberger: Definitely. The USGA banned anchored putting. But not all anchored putting. This is not the free-swinging stroke the USGA seems to hold so dear. I agree with Billy. But only at the highest level. For regular-Joe golf, by whatever means necessary is my motto.

Sens: Agreed. It’s like finding loopholes in the tax code. You can make rules, but people will always find creative ways around them that are technically legal but just don’t feel right. I agree with the whatever-means-necessary approach for the rest of us as well, which is why I’m sticking to the pool-cue method. So much easier.

Dethier: Yeah, I don’t really understand why it’s still permitted when the spirit of the rules change seemed designed to make everyone a free-swinger. It was rather bold for Billy to take this stand in the midst of two rounds with arm-locker Will Zalatoris, but I guess he deserves credit for speaking his mind, regardless of present company.

Piastowski: It certainly looks like it, doesn’t it? And you do have to appreciate Horschel’s candor, though it does dampen the Zalatoris feel-good story a bit. But I’m going to hold off on a complete opinion here until we hear some thoughts from a few of the arm-lockers. Do they feel they’re skirting the rules?

4. Speaking of the rules, Si Woo Kim incurred a rare shot-clock penalty during the third round of the RBC when his birdie putt on the 2nd hole fell after about a 55-second wait — the rules say you can wait only 10, and his birdie became a par. Adding to the story, Kim’s playing partner, Matt Kuchar, told a rules official that he swore he saw the ball move, only for the official to say “in this situation, the rules are modified because you could argue that there comes a point in time that we’ve got to play that golf ball. And that’s why you put that time limit on it.” You OK with the penalty in this situation?

Bamberger: Oh, please. Nearly a minute? It’s a joke. It’s golf. People have things to do, including the group behind you. Ten seconds is plenty.

Sens: For sure. But then, my general feeling is, if you’re not keeping up with Matt Jones, you aren’t playing fast enough.

Dethier: No, the rule here makes no sense and never has. It’s pretty elemental to golf that you don’t hit the ball while it’s moving. (Shoutout Phil Mickelson.) So why make an exception here? It’s not like Kuchar was making up his version of events — the reason they were waiting for it to fall is that they all agreed the ball was still in motion. This doesn’t happen often enough to meaningfully slow down play. Count the birdie putt.

5. Webb Simpson posited this week that part of the reason why today’s young players — Morikawa, Wolff, Scheffler, et al. — arrive on Tour ready to win is not only because of the access they have to Trackman and other game-improvement tech but also because there’s simply more golf available to them to watch. “You have PGA Tour app, you have ShotLink, so I think in college they’re able to see how we play golf courses,” Simpson said. “You can look up what guys did on the 15th hole here, the par-5, last year. We know where most of the birdies are being made, and even in that, where guys are laying up.” How much do you suppose the ability to watch more Tour golf is helping young players?

Bamberger: It’s made the game more mechanical, and made the scores lower. Young people imitate what they see on TV, in every walk of life.

Sens: I’m sure it can help some, but it can probably hurt others. There’s a long history of very good golfers going down the rabbit hole from information overload.

Dethier: Will Zalatoris echoed those sentiments after finishing second in his first-ever Masters start last week. I think it’s easier than ever for golfers to build a plan without ever seeing a course, based on ShotLink data showing patterns from previous years, yardage and greens books with better lines of play than ever, and analytic systems informing decision-making more effectively. Add in the increased deployment of technology like Trackman or Flightscope, and golfers know what they’re supposed to do and what they’re likely to do. But they still have to do it better than anyone else.

Piastowski: Definitely. Shoot, it’s helped my game just by watching it more during my time with these fine folks. The key, I think, is to have a good team around you to manage that wealth of information, and I think we’re seeing that from the new bloods, too.

6. Early Monday morning, hours after his breakthrough Masters victory, Hideki Matsuyama was spotted in the Atlanta airport, with one photo showing him casually looking at his phone — with the green jacket draped over a chair. If you won the Masters, where’s the first place you’re taking the green jacket?

Piastowski: Home. Put it in the closet. Act like I’ve been there. Go out and win another. Haha. Yeah, right. Every restaurant and bar I could possibly think of. Twice over.