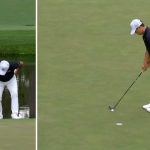 Si Woo Kim proved quite adept at putting with his fairway wood after snapping his flatstick.

Why, you might fairly ask, would a contender at the biggest golf tournament in the world eschew the flatstick for a longer, lofted club? Great question.

The answer is simple but admittedly entertaining. Through 13 holes, Kim’s round was going swimmingly. He’d made four birdies against zero bogeys and had climbed to five under for the tournament, just two shots off the lead.

On No. 14, Kim’s second shot sailed onto the back fringe. From there he pulled putter, rolled it four feet past the hole and missed the comebacker after a cruel lip-out.

No problem, right? Kim was still four under, just three shots back, with the gettable par-5 15th still to play. He piped his tee shot. His second shot sailed just over the back. And his chip shot ran just past the flag but settled harmlessly on the front edge of the green.

That’s all it took for Kim to snap — literally. As he stood behind his ball, Kim slammed his putter so hard into the ground that the club’s shaft broke. Uh oh.

In 2019, the USGA made a rules change allowing more latitude when it came to golfers replacing broken clubs. But it’s always been pretty clear that you can’t just break equipment out of anger and then replace it. And so it was that Kim pulled a fairway wood from his bag and putted with that instead.

In another reminder that these guys are awfully good: it worked! Or, at least, it worked better than you might expect. Kim two-putted for par on 15, then tossed his ball in the water.

He hit a strong iron shot on the par-3 16th, then two-putted (two-3-wooded?) for another par, even as each of his playing partners made 4. He hit the 17th green in regulation, too, and made another par.

Kim’s superb ball-striking continued on 18, where he found the fairway and the green. He actually looked dismayed when his birdie look missed the cup just short and left, swiping the air in frustration. (Some golfers have unrealistic expectations at very literally all times.) But then he tapped in for another par.

After his round, Kim took a few questions about the putter. He said he hadn’t broken it on purpose but succumbed to “just frustration” after the short putt on 14 and the less-than-perfect chip at 15.

“I was lucky I didn’t have like three, four, five feet,” Kim said. “And then the last few holes, I only had a birdie putt, so no pressure to make it. I think I just got lucky there.”

He added that he elected to use the 3-wood rather than blading a wedge because he felt he could control the speed better, especially on greens as fast as Augusta National’s. Asked if he had a backup putter, Kim declined to continue.

To tally up the numbers: Kim putted with his fairway wood for four holes. He totaled eight putts. He made four pars. He signed for a round of three-under 69, a score that left him just three shots off the lead heading to the weekend.

Who needs a putter anyway?