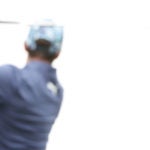 Rickie Fowler records his swing on the practice range on Wednesday at TPC Harding Park.

SAN FRANCISCO — Fog, glorious fog. It is fast becoming the trademark of this PGA Championship as surely as azaleas define the Masters. Wafting through the evocative cypress trees, the spooky fog makes it look as if Ichabod Crane should be teeing it up here, not Ben Crane.

I grew up 100 miles down the coast from Harding Park and have a keen appreciation for the fog. In these parts, it has pet nicknames: May Haze, June Gloom. To my eyes, the courses of Northern California are even more glorious in the gloaming than under blue skies. “It’s a cool look, for sure,” says Shaun Micheel, the 2003 PGA champion. “You don’t really see it like this anywhere else.” That sense of place is all the more important for the first major championship to be played without a single paying spectator.

Plenty of observers have been confused as to why players are wearing sweaters and turtlenecks during their practice rounds whilst in the Golden State in August. The thermometer may say 62 degrees, but any NorCal native can tell you the damp breeze knocks at least 10 degrees off of that, and sometimes more. As my junior high science teacher explained it, the scorching temperatures in the interior of the state pulls the cooler coastal air ashore, and this commingling creates the fog.

From Monterey to San Francisco, one of the best sellers at summertime tourist spots are fleece jackets; out-of-towners, seduced by Hollywood imagery of sunny California, show up in shorts and t-shirts and find themselves battling hypothermia. (The best weather in Northern California is always in the autumn, when the Central Valley cools enough to keep the fog away and the coast is bathed in warmth.)

The marine layer, to use a popular euphemism, affects visiting golfers, too. Among Pebble Beach caddies, the rule of thumb is that if players are from a temperate climate, the fog requires one more club than if they were at home; if players hail from somewhere hot, they need two extra clubs.

It affects the pros, too, and at this PGA Championship, the pea-soup is more than just a cool visual — it will be a defining part of the competition. Says Micheel, “Last week in Reno” — played in hot weather at an altitude of 4,500 feet — “I was hitting an 8-iron 190 yards. Yesterday, from 175 yards I hit 5-iron … [dramatic pause] … and came up 20 yards short. It kind of makes your brain hurt.”

It is increasingly common to see caddies and swing coaches daintily carrying portable launch monitors during practice rounds, like expensive man-purses, but for their players, it has become an obsession during the run-up to this PGA to calculate how the cold, heavy, wet air is affecting the way the ball flies. “Talking to some of the guys yesterday, they were laughing at their TrackMan numbers already,” Tiger Woods said. “They don’t have the swing speed or ball speed they did last week. It’s just the way it is.”

Following his Monday practice round, Justin Thomas fleshed out the math: “If I really cranked one out there, I was getting ball speeds of 174 miles per hour, something like that. Pretty much all of them were in the 70 to 72 range, whereas the [last week] in Memphis, I was getting 77 to 81. It is quite a difference.” Some 30 yards with the driver, according to Thomas. The wedges are affected even more. “It feels like as [the ball] is spinning more it kind of grabs onto the fog,” Adam Scott said. “It’s very nearly a full club difference, which is pretty significant on shorter distances.” Jordan Spieth said he was losing up to 13 yards on his usual iron distances.

Dialing in the right yardages, then, becomes a mix of art, science, meteorology and psychology. “I do it by feel,” Scott said. “From the time you tee off until you finish, the conditions are very likely to change. You need to learn to read the differences. It’s one thing to figure it all out on TrackMan, or however you want to do it, but it’s another thing to stand there at 180 yards during an important moment and know it’s a 5-iron when you are used to hitting it 215. You have to trust it.”

And so this PGA Championship offers a unique challenge, in both the tiny particles of mist clouding the sky and the fog of war they may induce as players battle for one of the game’s grandest trophies.