Tiger Woods will never do this in a round of golf, according to Jordan Spieth 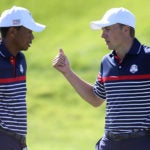 Tiger Woods and Jordan Spieth at the 2018 Ryder Cup.

Tiger Woods pulled his 141-yard third shot on the par-5 7th hole at Muirfield Village Golf Club two weeks ago. It was left and long, and he now had about a 28-footer for birdie. “Nooooooo, you … jacka–,” Woods said, bending his knees at “nooooooo” for emphasis. Woods was hot.

Woods was not overheated. He walked to the green, barely missed the birdie putt, cleaned up for his par and moved to the 8th.

Jordan Spieth said he has played a lot of golf with Woods. The good shots were good. The bad shots weren’t bad, either.

“The number one thing that struck me every round that we’ve played together is that he’ll get mad, but he won’t get negative,” Spieth said recently on the “Earn Your Edge” podcast, which is hosted by Altus Performance’s Corey Lundberg and Cameron McCormick, Spieth’s swing coach. “I’ve never heard him get negative. And I’m trying to take that into my game, where I’ve been less mad and more negative.

“He’ll hit a shot, and he’ll let himself know about it. But it’s mad. It’s not, ‘I can’t figure this out.’ There’s no can’t. ‘Or I’m struggling with this.’ It’s literally just him to himself, gets the anger out and then moves on. I’ve never once heard him be negative.”

The long-term negativity was not.

“Like, even when I’ve played flawless golf, I’ve been like, dang it, you know, at a shot and upset at the shot that I hit walking up,” Spieth said. “Like, ‘You’re really going to short-side yourself. There was no point in short-siding it. Bad swing.

“Look at the way Phil Mickelson would approach it,” Spieth said. “He hits a shot, and he’ll be like, ‘Ah,’ and those his hands up or whatever, but by the time he gets up to the next shot, a lot of times he looks at it as, ‘Wow, I get a chance to show off right here.’

“I’ve either hit it to where I have some amazing shot from the trees, or I’ve now left myself with the hardest short game shot that only I can pull off – ‘Watch this.’”