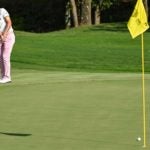 The moment Justin Thomas clinched his victory — and status as World No. 1 — at the WGC-FedEx St. Jude Invitational.

Justin Thomas would much rather be consistently good than occasionally great. The 27-year-old superstar rose to No. 1 in the world after winning Sunday’s WGC-FedEx St. Jude Invitational by three strokes.

But in a week defined by his consistency (including weekend scores of 66-65 en route to victory), it was Thomas’ stroke of genius just off the 18th green that resonated.

“It didn’t matter at the time, but that chip shot on 18 was pretty sick,” he said after the win. “Being ball in hand is a huge, huge advantage there. I probably wouldn’t have hit it that close, but, you know, it’s not a hard shot to hit inside 10 feet.”

The chip left Thomas with little more than two feet left for par, which he buried, clinching a final round 65 and the win.

It was the sort of moment that lacks context for television audiences, but one that Tour pros marvel at.

“It’s pretty hard to hit as close as I did under the circumstances and the grain and the nerves,” Thomas said. “I was pretty proud of that one.”

Part of that subtext? The equipment Thomas used to yo-yo his ball next to the pin. The new world No. 1 plays Titleist Vokey SM7 wedges like they’re going out of style, allegedly replacing them every six weeks to avoid “spin decay.” And while you might not be able to afford making bag changes that frequently, you can rest assured that if they work for the World No. 1, the Vokey’s can help make you consistently good AND occasionally great.

$120
Titleist Vokey wedges have dominated the Tour for some time, and that domination has continued for Justin Thomas with the SM7. The SM7’s feature progressive CG for each loft based on bounce and sole grind for improved accuracy, while Spin Milled grooves vary by loft for tight tolerances and spin control.
Buy Now