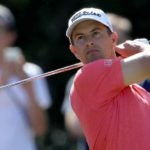 Adam Scott tees off at the Players Championship, the last event before the PGA Tour's hiatus due to the coronavirus.

Ross Campbell told his best friend over the phone that when he plays golf, he gets very wobbly in the legs.

Adam Scott told his best friend over the phone that when he plays golf on the PGA Tour, he also gets wobbly in the legs.

They talked for a while.

“I’m standing in the background crying and happy as they chatted away,” Campbell’s wife, Pam, told the Sydney Morning Herald.

Scott, winner of 31 international tournaments, a former world No. 1 and the 2013 Masters champion, has never met Campbell.

They still talked for a while.

Campbell talks about Scott quite a bit. The 76-year-old believes that he and his fellow Australian golf together, exchange golf tips and drink beers at the clubhouse where Campbell used to live, a result of seven brain tumors. Scott has been his favorite player.

““He’s always loved Adam Scott,” Pam Campbell told the Morning Herald, “particularly because he is Australian. But the brain and lung cancers have caused him to believe they play regularly together.”

As the cancer worsened, the Campbell’s daughter Leigh got in contact with Scott. She told him about her dad.

Scott both sent a video and made the call.

Ross Campbell jumped right in with his best friend when the phone rang, the Morning Herald reported.

“Ross mentioned that he gets very wobbly in the legs when he goes out to play,” Pam Campbell told the Morning Herald. “He’s in a wheelchair and can hardly stand up, but Adam must have sensed this and said he gets wobbly in his legs, too.”

Each hung up the phone.

“It’s a story to warm the cockles of your heart in these troubled times,” Pam Campbell told the Morning Herald.