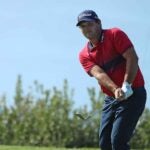 Of all the things Patrick Reed’s victory at the Farmers Insurance Open will be remembered for, it’s safe to assume his short game will be pretty far down the list.

Reed — both golfer and Twitter account (Twitter accounts?) — had a tumultuous week at Torrey Pines. But as has become routine, the former Masters champ responded to the controversy splendidly, carding a final round 68 en route to victory Sunday.

In stark contrast to the rest of his weekend, Reed’s final round performance was remarkably routine. He recorded only a single bogey to four birdies or better and held the lead down the back nine with a remarkably steady hand. In fact, of his final nine holes, only the 15th featured an inkling of concern.

Reed yanked his drive on the long par-4 into the trees left, leaving him with virtually no look at the green. Rather than testing the trees with a sweeping hook, Reed elected to lay up in the fairway short. Minutes later, he was sizing up his biggest shot of the day — a 50-yard pitch that gave him only a puncher’s chance of saving par.

He struck the ball clean and sent a low, piercing shot straight at the pin. The ball took one big hop on the green, then skidded to a stop four feet from the hole. Reed drained the par.

It was the sort of moment when Reed’s short game is at its best — incredibly difficult and yet incredibly simple.

“I think that’s the biggest thing of what we’re trying to I wouldn’t say really eliminate, but to not always have to rely so much on the short game,” he said after the round. “Instead of having to have the short game save me, more use it as a weapon.”

Reed’s short game was a weapon Sunday in the same way an Advil is a weapon after a long night out. As he traversed Torrey Pines, Reed’s wedges blunted his headaches, if not outright removed them.

“Right now there’s going to be growing pains with the full swing, you’re going to always want to revert kind of back to the old swing and because of that you’re going to put yourself in some situations where you’re going to have to allow that short game to work,” he said. “I think that was the biggest thing was being able to kind of get those crucial up-and-downs on 14, 15 and then for me was stepping up on 17, 18 to make two really solid driver swings there when really you had to go ahead and hit a solid drive and get yourself in position to allow yourself to kind of coast coming in.”

Patrick Reed’s headaches were relieved thanks in part to his Titleist Vokey SM8 wedge. Vokeys are among the most popular wedges in the world; beloved for their soft feel, responsive playability and shot versatility. They’re also among the most customizable, with dozens of different grind and loft combinations.

So, if you’re looking to cut down on your greenside headaches, perhaps it’s time to opt for golf’s bottle of Advil.

Find your perfect grind with the Titleist Vokey Design SM8 Wedges. Bob Vokey’s 6 Tour-proven sole grinds give all golfers a set of wedges fit for their swing type and course conditions. Finely-tuned Progressive Center of Gravity placement achieves improved trajectory, distance control and feel. The Spin Milled groove cutting process and 100% quality inspection prove nothing spins like a Vokey. Vokey recommends 4° – 6° of loft separation between your wedges, resulting in 10-15 yard gaps. Check out 150+ reviews from our gear experts in the ClubTest 2021 collection.
Buy Now

Want to really dial in your wedges? Schedule a fitting with the experts at our sister company, True Spec Golf.

Find more gear for your game