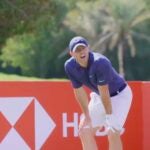 Rory McIlroy rode a wave of emotions during this content shoot.

The European Tour content team is back with some heavy hitters in its chase for the ace challenge. In this iteration, they enlisted two of the best players in the world: Justin Thomas and Rory McIlroy.

McIlroy and Thomas are two of the best ball-strikers on the planet. They sport two of the most fluid, visually pleasing golf swings. But can they make a hole in one, in just 100 combined attempts? The distance was a perfect 148 yards, filmed during the Abu Dhabi HSBC Championship back in January.

To avoid any and all spoilers, watch the video for yourself below, and then scroll further for a breakdown of the action.

In all fairness, the video gets off to a slow start. Thomas and McIlroy begin flighting shots into the par-3 that land right around the exact yardage, just off to the left or right. “I’ve got the distance down,” Thomas says. “I just can’t hit it straight enough.” They are easing their way into things, not getting too invested in the negative results.

Soon enough, the divots start really flying. Then the frustration sets in.

Then we get philosophical McIlroy. “It’s so hard,” he said. “You come so close, but it’s not good enough.” Yes, Rory. We’ve all been there. Just minutes later, more Zen from McIlroy: “It’s hard because you’re trying to do the same thing over and over and over again. And then when it doesn’t work, you sort of try to change it, but you end up going back to what you were trying to do before. Mentally, a little taxing.”

Yep, we’ve all been there Rory. That’s golf for ya. In the end, McIlroy and Thomas hit it inside 10 feet more than 50% of the time. They combined to finish inside five feet a wicked 31% of the time, and each hit multiple balls within inches of the cup.

But eventually, the disgruntled pros pushed on through swings 99 and 100, failing to crack the chase for the ace, and were forced to move on. Suddenly, you don’t feel so bad about never making an ace yourself.