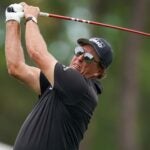 Phil Mickelson is making his first Tournament of Champions start in over 20 years this week.

A new year on PGA Tour kicks off this week with the star-studded 2022 Sentry Tournament of Champions in Hawaii. Here’s everything you need to know to watch the tournament.

The new year is upon us, and after a lengthy break for the holidays, the PGA Tour is back in action at the traditional year-opening event in Kapalua. The Tournament of Champions is the most exclusive field of the year, with only players who captured victories in the previous season invited to partake.

Among the 38 top pros in the field this week is 51-year-old Phil Mickelson. Mickelson earned is way into the TOC with his historic victory at the 2021 PGA Championship. Despite Mickelson’s 45 career wins, he hasn’t teed it up in the TOC in over 20 years, making this an extra-special appearance.

His lengthy absence aside, Mickelson has actually won the TOC on two occasions way back in the 1990s. Now he’s back and ready to face off against the likes of World No. 1 Jon Rahm, Collin Morikawa, Jordan Spieth, Bryson DeChambeau, Hideki Matsuyama, Justin Thomas and more.

You can find the full list of tee times for Thursday’s first round below, along with complete information about streaming the 2022 Sentry Tournament of Champions online or watching the action on TV.

How to watch the Tournament of Champions on TV

You can watch the entire 2022 Sentry Tournament of Champions on Golf Channel and NBC. Golf Channel will provide coverage for all four rounds of the tournament beginning on Thursday, with NBC taking over for a two-hour broadcast on Sunday. Check out the full TV schedule below.

How to watch the Tournament of Champions online, streaming

The best way to stream the 2022 Sentry Tournament of Champions online is via PGA Tour Live on ESPN+. PGA Tour Live will stream coverage of the event from 2:20-10 p.m. ET on Thursday, 3:15-10 p.m. ET on Friday and Saturday, and from 1:30-8 p.m. ET on Sunday, in addition to featured group coverage. Sign up for an ESPN+ count here to start streaming. You can also stream the Golf Channel coverage at golfchannel.com/watch and the NBC telecast at nbcsports.com/live by logging in with your cable credentials.