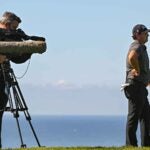 All eyes — and cameras — were on Patrick Reed during Sunday's final round.

For years, a swath of golf fans — many of whom inhabit various forms of social media — participated in a time-honored ritual. Around 3 p.m. on select Sundays, they’d tune into CBS’s golf coverage. By 3:30, they’d be shouting.

Into the television. Into the internet. Into the void. It didn’t matter, the plea was the same.

Some Sundays were better than others, but the difference usually amounted to a change in volume, not tenor.

Then came last Sunday, and CBS’s coverage of the final round of the Farmers Insurance Open.

For 11 straight minutes — the show’s first 11 minutes — CBS showed no live golf. Not a single shot. Rather, Sellers Shy began his second broadcast as coordinating producer of Golf on CBS with silence, then discussion, then more silence, then a commercial break, then more discussion.

Nightmare? Far from it. It was brilliant.

For 11 minutes — and, really, through the remainder of the Sunday broadcast — Shy and his team helped make the Farmers matter. Not because of the events that preceded the final round, but because of the manner in which they presented them to the audience.

He could do the safe thing: begin the broadcast as CBS always does — with some music and a quick recap of the contenders’ rounds-in-progress, then return to Reed when the time was right.

Or he could do the right thing. His team could address a highly controversial situation involving the tournament leader at the onset of the show. His commentators could conduct an earnest, honest conversation about one of golf’s most sacred tenets. They could inform their audience, educate them and, frankly, illustrate the CBS golf team’s independence.

So, for 11 minutes — an eternity in broadcast television — Shy did the right thing. One by one, his squad did the rest.

“When it comes to Patrick, his talent and desire to be great as a player is widely recognized,” Jim Nantz said. “But there’s so much history involving him and the rules of golf.”

“Comparing these two examples, we’re talking about reputation,” added Nick Faldo, Nantz’s sidekick. “Rory has just been voted on the player policy board and, of course, Patrick had the bunker incident. As professionals, I know I have never and I have never seen another player — if it’s plugged, we go, hey, come and have a look at this. That for us is what caused the gray area.”

“The rule is correct but it’s because of that questionable intent that we’re going through this process now,” Ian Baker-Finch said.

“If there’s a problem, a gray area, just leave everything alone and then let the rules official determine,” Frank Nobilo said. “If that had happened, not only would it be a free drop but he would have got off scot-free.”

“I keep going back, looking at the situation and going back to the principles of the rules of golf,” Dottie Pepper said. “When you need to help get the ball back into play, you need to use everything at your disposal, including a rules official if you ever touch the golf ball. Mark it, if there’s a question, call immediately.”

It was a telling moment for Shy, who is only the third coordinating producer of Golf on CBS in 59 years. For months, he worked with CBS Sports chairman Sean McManus to build new graphics, create new visuals, even score new music. Then, on just Week 2 on the job, he ripped up the playbook and gave golf fans something that looked nothing like the golf television they’d come to expect.

It was also a moment of trust. If the Reed analysis didn’t come across properly, Shy risked a skewering at the hands of the same golf fans he had hoped to win over. If Nantz, Faldo, Finch, Nobilo or Pepper misspoke, he might run into criticism from CBS higher-ups or the PGA Tour.

For golf fans, CBS’s direct handling of the Reed affair wasn’t the only cause for optimism. The network knew when to stay out of the action, when to jump in, when to grab interviews and when to follow the golf. The leisurely pace at which CBS tends to cover events was also improved, but perhaps still a beat slower than many golf fans would prefer. (The best golf coverage moves briskly, as ESPN showed at the PGA Championship in August.)

Among the other highlights was a perpetual mini-leaderboard that most fans seemed to agree was clean and non-intrusive. Amanda Balionis’ new augmented-reality setup (credit Fox’s U.S. Open coverage for introducing this tech) is begging to become a bastion for course-design geeks. Drone shots and other tech worked well, if unspectacularly. The new music? Solid if not memorable…but perhaps it needs time.

In his grand introduction to television, Ken Tackett, CBS’s PGA Tour rules official for the 2021 season, faced a near-impossible situation in embed-gate. His analysis was technically sound, but reinforced a fundamental issue with the usage of current-and-former rules officials in television roles: It’s hard to ask analysts to criticize their colleagues’ (and in many cases, friends’) decisions.

On a conference call previewing the 2021 season, Shy was coy about what to expect from his new broadcast.

“We’re excited for showing you hopefully in the first hour that we’re improved,” he said. “Hopefully in this season and beyond.”

In the end, Shy didn’t need an hour to prove that. All it took was 11 minutes.