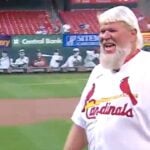 The PGA Tour Champions is in St. Louis this week for the Ascension Charity Classic, so the Cardinals took advantage of some top pros coming into their backyard.

First, the team decided to have a John Daly bobblehead giveaway for fans. It also asked Daly, a longtime Cardinals fan, to throw out the first pitch before Wednesday’s game against the LA Dodgers. And of course, with Daly, it was nothing like your typical ceremonial first pitch. Daly, wearing a Cardinals jersey with the number 91 — the same year he won his PGA Championship — had no intention of gingerly throwing this to home plate.

“We’re going to throw it as far as we can, brother,” he said, walking out to the mound.

And he wasn’t kidding. Daly cocked back and released his ball into the sky, trying to throw it over the netting and into the crowd behind home plate. But that’s no easy toss. Big John didn’t make it.

Daly, closer up this time, tried again and got it to a fan.

“Now I know why you need cleats on that mound,” he said.