John Daly four-putts at senior major. Then he is DQ’d. 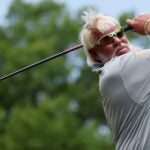 John Daly hits his tee shot on Friday on the 12th hole at Greystone Golf and Country Club.

And then, despite being toward the top of the leaderboard, John Daly was gone.

In a strange sequence during the Regions Tradition, the first major on the PGA Tour Champions circuit, Daly shot an even-par 72 during Friday’s second round at Greystone Golf and Country Club in Alabama, sat in a tie for 16th at the halfway point, then was disqualified for failing to sign his scorecard. It was a breach of Rule 3.3b (2), which states: “The player must certify the hole scores on the scorecard and promptly return it to the Committee after which the player must not change the scorecard. If the player breaches any of these requirements in Rule 3.3b, the player is disqualified.”

Why Daly failed to sign remains a mystery. At four-under overall, he was seven strokes behind leader Steve Stricker entering Saturday’s third round, and in 102 Champions starts, Daly had never been DQ’d.

During Thursday’s first round, Daly shot a four-under 68 and was three strokes off the lead. On Friday, he remained in contention, birdieing the 13th, 16th, 18th and 2nd holes (he started on the back nine), before a disastrous finish.

On the 207-yard, par-3 7th, according to the Champions’ online scoreboard, Daly hit his tee shot into the rough, then took three additional shots before finishing with a double-bogey five. He parred the 448-yard, par-4 8th. Then on the 429-yard, par-4 9th, Daly found the green in regulation, before the four-putt and a double-bogey six.

Over the first two days of the tournament, the Champions Twitter feed twice shared highlights of Daly’s play, and after Thursday’s first round, he was among those who talked to reporters afterward.

“The second hole, I missed a good opportunity for birdie, and then the third hole, I hit a good sand wedge, it just wasn’t long enough and I made bogey,” Daly said. “Other than that, it was pretty solid. I gave myself a lot of chances, I left a lot out there, got a couple of good breaks, too. It was a good day for me.”

Daly’s next start could be another major championship. The 1991 PGA Championship winner is currently in the field for next week’s PGA, to be played at Southern Hills in Tulsa, Okla.