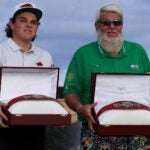 Team Daly fired a final-round 57 to win the PNC Championship by two shots.

Team Woods was easily the most popular duo at the PNC Championship, but in the end it was Team Daly that took home the hardware.

With a birdie at the 18th hole, John Daly and his son, John Daly II, capped off a record-setting weekend at the Ritz-Carlton Golf Club, finishing at 27-under for the tournament to win the parent-child event by two strokes over Team Woods.

Their 27-under total is a record for the PNC Championship.

“It’s just one of the highlights of my life,” Daly said said. “To be able to play in a PGA Tour event with your son and win, it’s pretty daggone special.”

Playing two groups ahead of the Dalys, Tiger and Charlie Woods did everything they could to put pressure on the eventual champs. Starting with the par-4 7th hole, Team Woods reeled off 11 straight birdies to get to 25 under for the tournament heading to the 18th tee.

“We had a little run there,” Woods said.

But needing an eagle at the par-5 finisher to put pressure on Team Daly, Tiger and Charlie could only muster a par to finish off their round of 57. Their 25 under total was good for a solo-second finish. Team Woods did not make a bogey over 36 holes after making two bogeys in their debut in the event last year.

“We made 11 in a row, and on the last hole we knew on the tee box that we needed three to probably get into a playoff or at least make it interesting for the Dalys’ back there,” Woods said. “Unfortunately, we didn’t chip-in and we didn’t make the putts, either. But it was fun.”

Team Daly made 13 birdies (plus an eagle) of their own during their final round, shooting a final-round 57 to set the tournament scoring record. And though they had the tournament well in hand standing on the 18th green, the duo finished in style with a birdie to put a punctuation mark on the week.

“We both just played great,” Daly said. “He played unbelievable yesterday, but I played a little better today, so I made him happy.”