‘No common sense’: John Daly also jabs USGA — and calls for a rollback 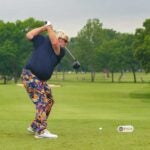 John Daly hits a drive during the Senior PGA Championship earlier this year.

Phil Mickelson was critical of proposed changes to the driver.

The man who gave birth to the phrase “grip it and rip it” agrees — then zeroed in on the piece of equipment the club hits.

“I totally agree with you brother but why don’t they just change the cheapest thing made in golf……the #golfball #bringthegolfballback NO common sense!” John Daly tweeted on Saturday.

Daly’s comment comes in response to a Mickelson tweet on Friday, in which he wrote: “Word is USGA is soon rolling back driver length to 46inches.This is PATHETIC.1st it promotes a shorter more violent swing (injury prone,) doesn’t allow for length of arc to create speed,and during our 1st golf boom in 40 years,our amateur gov body keeps trying to make it less fun.” Mickelson would continue his criticism in the comments below the tweet.

The ire appears to be directed toward a potential 46-inch limit on driver shafts, one of the proposed equipment rules the USGA and the R&A discussed in February as part of an update to its Distance Insights Report. The cap on driver shafts is currently 48 inches, and Mickelson’s comments suggest a decision has been made. (The USGA declined GOLF.com’s request for comment.)

Daly’s tweet calling for a rollback of any kind, even a ball, could be considered surprising, considering he led the PGA Tour in driving distance 11 times, though his length was also generated in other ways, namely a lengthy backswing. He’s also been critical of the USGA in the past, including saying in 2018 that he would never play in an event run by the governing body after he was denied the use of a cart at the U.S. Senior Open.

The Distance Insights Report update did address potential ball changes as part of its “research topics/areas of interest” — specifically, “the potential use of a Local Rule that would specify the use of clubs and/or balls intended to result in shorter hitting distances,” and “a review of the overall conformance specifications for both clubs and balls.”