U.S. Open 2020: 5 storylines for Friday’s second round at Winged Foot 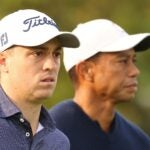 Justin Thomas leads heading into the second round of action from the U.S. Open at Winged Foot.

It’s Friday at the U.S. Open and the leaderboard at Winged Foot couldn’t look much better. A bevy of big names greet fans atop the leaderboard after 18 holes at the West Course, and while we didn’t see the carnage we expected from round one (more on that in a minute), there’s still plenty of time for fans to get their carnage fix.

Here are five storylines to follow throughout the Friday’s second round:

The carnage that wasn’t

After weeks wrought with anticipation over the difficulty soon to be presented to golfers as they faced mighty Winged Foot, Thursday was … pretty tame. Twenty-one golfers enter Friday’s second round under par, a number that isn’t astronomical, but certainly qualifies as being more than we expected through 18 holes (particularly for those of us who predicted an over-par winner at Winged Foot). Beyond scoring, it was clear that the West Course was playing softer (if not slower) than we’ve come to expect from a traditional U.S. Open track, let alone one that hosted “the Massacre at Winged Foot.”

On NBC’s broadcast Thursday, lead analyst Paul Azinger speculated the setup might have something to do with the USGA’s goal of getting all 144 players’ rounds in with limited daylight hours. It’s not clear if this was indeed the USGA’s reasoning, or if things will be markedly tougher in round two, but the Winged Foot setup is worth watching with a close eye on Friday.

The leader in the clubhouse

Justin Thomas enters Friday’s second round with a one-stroke lead after a fabulous opening round 65. Thomas, who finished with a disappointing T-37 at the PGA Championship, looked sharp all the way through his first round, stuffing his approaches close and making only a single bogey.

His driver, which has been a problem spot recently, was rock solid. Thomas found nine of 14 fairways, ranking tied for 7th in the field in that category.

Rory McIlroy finds what he’s been looking for

Rory McIlroy was good Thursday. Not great, or spectacular, or bad, just good. Fortunately for McIlroy, that’s exactly what he was hoping for. Over the last few years, Rory’s opening round performances at majors have all looked the same, and they haven’t been good — most memorably his disastrous 79 at the 2019 Open Championship.

On Thursday, Rory McIlroy looked like Rory McIlroy, riding impressive overall play to an opening-round 67, two strokes off the lead.

“First round of a major you’re always anxious to play well, and maybe I’ve overthought it at times,” McIlroy said Thursday. “I just went out today and took what was given to me a little more relaxed and played really nicely.”

McIlroy heads into Friday with the opportunity to build on his Thursday showing, rather than dig himself out of it. Look to see if he can capitalize in the afternoon.

Phil and Tiger are struggling

Phil Mickelson entered Thursday hoping to avenge his Winged Foot demons with a win this week, and he left Thursday with a lot of work to do just to make it to the weekend. Phil hit just two fairways all day, made 10 (!) bogeys or worse, and sat second-to-last in the entire field after an opening-round 79. He needs an all-time showing Friday if he’s going to make the cut.

Tiger Woods, however, is in good position to make it to the weekend, so long as he can straighten out his driver. Woods was lights-out around the green all morning Thursday, putting with touch he struggled to find at the PGA Championship in August. He’s back to using Old Reliable, his Scotty Cameron Newport II putter, and if he manages to make another five birdies on Friday, he’s close to a lock to make it to the weekend.

Most concerning for Tiger was his play off the tee. Woods found only six fairways on Thursday and seemingly blocked the same amount into the right rough. Keep an eye on his driver early on Friday.

Perhaps some of the reason for Winged Foot’s surprising toothlessness was due to the weather. Thursday was a perfect fall day in Mamaroneck, with no wind and temperatures in 60s and 70s — fantastic weather for playing a round of golf, not so much for witnessing pros battle the elements. Friday should prove a slightly different test, with clouds and winds up to 15 mph for most of the day.

Will that help to firm up the greens, or provide an added challenge to the players making the rounds? And how about the pin locations, which were favorable today, but most certainly won’t be on the weekend? It’ll all factor into the setup Friday, weather included.