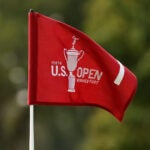 Friday's second round will likely have some breezier conditions at Winged Foot.

After day 1 at the U.S. Open, there are 21 players under par. The conditions presented by Mother Nature were rather tame. The wind barely blew and the course played less difficult than everyone imagined.

Friday’s forecast will bring some weather that, at the very least, will make for a tougher conditions than what we saw Thursday. For starters, the temperature highs will be in the mid-60s, so at least five degrees colder than Thursday. Cool temps in the morning in the low- to mid-50s will lengthen the course before noon.

But that’s not all. The wind is expected to gust much more Friday than it did during the first round. Throughout the second round we can expect typical winds of 12 mph at the least and hanging in the mid-teens throughout the day. Will that raise the scores? It’s a very fair expectation.

Scroll down for the hourly forecast at Winged Foot Friday. While they won’t list the wind speeds, just know that it’s expected to gust around 15 mph throughout.