On-course mics capture the most relatable Phil Mickelson moment ever 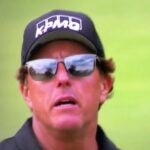 Phil Mickelson continued an unenviable trend in his first competitive round back at Winged Foot since his collapse at the 2006 U.S. Open.

During Phil’s final round in 2006, he hit just two fairways — something that ultimately cost him on the 72nd hole, when one-too-many wayward drives resulted in an infamous double bogey.

In 2020, he came in with a plan: He was going to chase accuracy. He made alterations to his equipment and technique to help him do it — but it didn’t seem to help during his first round. Here’s how he fared during his first six par 4s.

That left miss — which for Lefty is a slice — crops up because, as GOLF Top 100 Teacher Jonathan Yarwood explains below, Mickelson has a tendency to get steep with the club on his downswing. He has great hands, so he makes it work, but it’s not always easy.

As Yarwood explains, the face comes in slightly steep and open….

…and he rolls his hands to square it.

But that timing-dependent move doesn’t always work, as we saw on Thursday. But then came the 9th hole, and — sweet relief! — he hit his first fairway of the day. 182 yards away for his second shot into his first par 5, with a potential birdie on the cards, only for him to miss it right again.

His moment of frustration, captured by Golf Digest‘s Christopher Powers here, is something every golfer can relate to.

We know how you feel, Lefty.