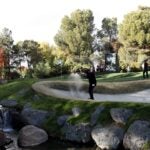 Phil Mickelson hits a shot on the 9th hole at Shadow Creek Golf Course during his 2018 match against Tiger Woods.

The PGA Tour is setting up a Las Vegas residency.

This year’s CJ Cup is moving from The Club at Nine Bridges on Jeju Island, South Korea, to Shadow Creek Golf Course in Las Vegas due to the coronavirus pandemic, the Tour said in a statement on Monday. The Oct. 15-18 event will follow the Shriners Hospitals for Children Open at TPC Summerlin in Las Vegas the week before.

The move had been expected. South Korea currently has a 14-day quarantine for anyone traveling into the country from the U.S.

“While our players have always looked forward to visiting Korea, the current circumstances provided this new opportunity to bring the event to Las Vegas, which will also provide brand exposure and awareness to the viewing audience in the United States and around the globe,” Ty Votaw, PGA Tour Executive Vice President, International, said in the statement.

Shadow Creek will get exposure, too.

The course hosted the highly touted first match between Tiger Woods and Phil Mickelson, on the Friday after Thanksgiving. Before that, it was a bit shrouded. When the Tom Fazio-designed course opened in 1990, players were allowed only through an invitation from the course’s owner, casino owner Steve Wynn. The course eventually became public, though players now must stay at an MGM hotel and pay around $500, which includes a limo pickup and dropoff.

“We are delighted to bring the CJ Cup to the U.S. and to the renowned Shadow Creek,” Ethan Kim, sports marketing director of CJ Group, said in the statement. “It is unfortunate we will not be able to showcase the PGA Tour and the best players in the world on Jeju Island this year.”

The CJ Cup was to start a three-tournament swing through Asia, and, as of now, the other two events – the Oct. 22-25 Zozo Championship in Japan and the Oct. 29-Nov. 1 World Golf Championships-HSBC Champions in China – remain on the Tour’s schedule. China, however, has canceled all of this year’s international sporting events.

“The CJ Cup quickly became one of my favorite events on Tour,” Justin Thomas, last year’s CJ Cup champion, said in the statement. “While winning twice certainly helped, the hospitality shown to us by CJ Group and the Korean community has made the tournament special to all of us as PGA Tour players. It’s unfortunate that we won’t be able to travel to Korea for this year’s event, but it is fantastic that we will still be able to shine a light on CJ Group through the tournament at a venue like Shadow Creek.”