Phil Mickelson was all Phil in Champions Tour debut 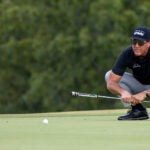 Phil Mickelson lines up a putt on the 13th hole at Ozarks National Golf Course on Monday.

The newbie whipped his driver into the ball, watched it explode down the middle of the fairway for a few seconds and took four steps to pick up his tee that had shot off to his left. The newbie took 10 steps down the fairway. The newbie was still holding his driver.

“You wanna carry that? The driver?” the newbie’s caddie, also his brother, asked him.

“Oh, sorry. Uh, yeah, no. I’ve got to get used to this,” the newbie said, laughing. He handed the driver back to his brother and took off back down the fairway, smiling.

On the first hole of his Champions Tour debut, on his first shot, Phil Mickelson made a minor misstep. Even a bombs-hitting, shades-wearing and coffee-drinking five-time major champion, newly 50, can’t avoid the first-tee jitters.

“Certainly it’s a situation where yeah, you want to win your – you want to come out, you want to play well, the expectation’s there,” Mickelson said. “So if you play well and win well, you’re supposed to do that, and if you don’t, it’s like what happened? So I wanted to make sure that I was playing well when I played in my first one.”

Did he ever. The early bumble turned into four hours of birdies on Monday.

Mickelson birdied that first hole at Ozarks National Golf Course in Ridgedale, Mo. He drove the green on the 345-yard, par-4 3rd hole, almost springing out of his shoes on his swing. Another birdie. He birdied 4, 5 and 7. Three more birdies. He bogeyed 9, but then birdied 11, 13, 14, 15, 16 and 17. Eleven birdies in all. Mickelson shot a 10-under 61, including a back-nine 29, and he finished as the first-round leader by a stroke at the Charles Schwab Series at Ozarks National, part of back-to-back events at the Big Cedar Lodge resort.

“I was a little nervous. I wanted to get out and play well,” Mickelson said. “So I was able to get a pretty good start, I birdied five of the first seven and I felt like I was getting in a groove, and on the back nine, made some nice putts, so it’s fun to play well.”

Mickelson wished his debut would have been delayed. He wishes he were at Olympia Fields and not the Ozarks.

He has played a full-time schedule on the PGA Tour schedule this season and qualified for the first leg of the Tour’s FedEx Cup playoffs, at the Northern Trust at TPC Boston in Norton, Mass. Mickelson shot rounds of 74 and 68, even-par, missed the cut by three shots and missed qualifying for the next step of the postseason, the BMW Championship at Olympia Fields Country Club near Chicago.

The PGA Tour veteran opted to be a Champions Tour newbie.

“I went into Boston last week, I shot 61, 63, 4 back home and I was like ready to play,” Mickelson said. “Then I get there and I shoot 3 over and it just threw me off. So I wanted to keep playing because I felt like I was playing well. So to have the opportunity to play in these events and this one in particular was really special and I’m very appreciative of that.”

Mickelson’s playing with the over-50 crowd. But he’s playing under par. In two weeks, he’ll rejoin the PGA Tour for the Safeway Open in Napa, Calif. The week after, it’s the U.S. Open, the one major that has eluded him, at Winged Foot Golf Club, site of one of his greatest near-misses. If he can be a champion on the Champions, maybe he can finally win a U.S. Open championship.

“Yeah, just to get in competition, to go out and shoot a number, because I’ve been playing at home, it’s a whole other thing coming out on the road, playing against severe competition and really trying to play your best without forcing it and being patient,” Mickelson said Saturday. “So I just want to compete a little bit and see if I can start shooting some low scores again.”