Why Justin Thomas thinks 59 (or even 58!) might soon not be good enough 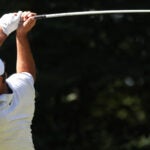 Scottie Scheffler hits his tee shot on the 9th hole at TPC Boston on Friday.

Scottie Scheffler shot a 12-under 59 on Friday at TPC Boston, the low round during Friday’s second round of the Northern Trust. Dustin Johnson was a stroke behind Scheffler after his 60, but no other player was closer than five. Eleven other players in PGA Tour history have also broken 60, but only one has shot lower than Scheffler’s 59 – Jim Furyk’s 58 in 2016.

A 59 could also soon be second best – in the same round. A 58, too, according to Justin Thomas.

“I said it a couple years ago – I still think someone is going to shoot a 56 or 57 or 58 on Tour, whether it’s next couple years or 10 or 15 years,” said Thomas, who shot a 67 on Friday, eight strokes behind Scheffler. “We’re all getting so much better, and especially if you get a place like this with really good greens, and if it’s soft, we’re pretty good with our distance control and pretty good at golf to where we get it rolling, who knows what can happen.”

It almost happened a few hours after Scheffler signed for his 59.

Johnson shot a 9-under 27 on his front nine, the lowest nine-hole score in relation to par in PGA Tour history, with birdies on 1, 3, 5, 7 and 8 and eagles on 2 and 4. He was 11-under through 11 holes. Johnson parred his final seven holes, but had birdie putts on all seven.

“I was trying to birdie every hole, so you know, just on the back nine, just didn’t get in the fairway enough to attack all the flags,” Johnson said. “When I was in the fairway, I hit nice shots, though, and I gave myself some good looks.”

Sub-60s have been coming more frequently.

Al Geiberger shot the first, with a 59 at the 1977 Memphis Classic. The second came 14 years later, with Chip Beck’s 59 at the 1991 Las Vegas Invitational, the third came eight years after that, with David Duval’s 59 at the 1999 Bob Hope Chrysler Classic, and the fourth came 11 years after that, with Paul Goydos’ 59 at the 2010 John Deere Classic. Since then, there have been eight sub-60s, including Stuart Appleby’s 59 at the 2010 Greenbier Classic one month after Goydos’ and Furyk’s 58 at the 2016 Travelers Championship. Justin Ray, the head of content at the 15th Club, reported Friday that the approximate rate of sub-60 rounds on the Tour from World War II through 2009 was one in every 400,000 rounds, while from 2010 to the present, the rate was one in every 25,000 rounds.

“And I think the hardest part about it is that it’s so much pressure because you don’t know if and when you’re ever going to have a chance again,” he said. “I fully feel that I have the firepower and I’m good enough and I’m going to have plenty of chances at 59 over my career, but I just don’t know if that’s true or not.