Tiger Woods fires low round of year at TPC Boston 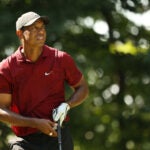 Tiger Woods closed with a 5-under 66 at the Northern Trust.

It won’t go down as one of Tiger Woods’ most memorable Sunday charges, but it was still an excellent round of golf.

Woods, playing in an early morning pairing alongside Rory McIlroy, birdied his first four holes and looked sharp all day en route to a final-round five-under 66, his lowest round of 2020.

The most encouraging part of Woods’ final round was his laser-like iron game. He stuffed a wedge at the opening hole and left himself just two feet for birdie. At No. 2 he flagged a long-iron approach to set up a two-putt birdie.

Woods hit his tee shot at the par-3 3rd to just 45 feet, but no matter: he canned that one, too. And a gorgeous cut driver at No. 4 set up a short eagle look and led to a fourth consecutive birdie.

He made a neat par save at 5 after clanking a bunker shot off the flagstick, then made a two-putt par at 6. He hit driver off the deck into the greenside bunker at the par-5 7th, from which point he pulled off a particularly good up-and-down for another birdie.

Woods made his only bogey of the day after missing long left at the par-3 8th, but wasted no time getting it back with another iron shot to three feet at No. 9.

On the back nine, Woods gave himself several more short looks for birdie but made nine pars instead.

Woods’ tournament position itself didn’t meaningfully change — he was still well outside the top 50 when he finished — but he seemed encouraged heading to next week’s BMW Championship.

“Today was good,” he said. “Today I thought was good all the way around. I hit a lot of good shots. My body feels pretty good.”

The 66 marked his lowest round of 2020, one shot lower than his closing 67 at the PGA Championship. The last time he beat 66 was during his win at the Zozo Championship last fall, when he posted two rounds of 64.

Woods has now finished outside the top 35 in each of his three events since the PGA Tour’s restart. After his round, he assessed his form thus far.

“I haven’t played my best. I haven’t really played that much. This has been a very different year for all of us, and that’s one of the things that we’ve all had to make adjustments, and for me, I’m just now starting to get into the rhythm and flow of competing and playing again. Hopefully it gets better.”

The stats confirmed what was clear from watching: Woods was money from tee to green on Sunday. He gained more than three shots on the field approaching the green, the highest total of the early wave. And he hit 10 of 14 fairways and 16 of 18 greens.

He made 100 feet of putts, his highest total of the week, but was actually below-average on the greens.

Woods will make back-to-back starts for the first time this year when he tees it up at Olympia Fields next week.