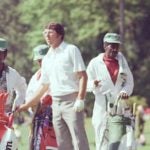 Hale Irwin prepares to hit a tee shot at the Masters in 1976.

Yesterday, today and this weekend, Bamberger Briefly returns in memory of, and in tribute to, Charlie Sifford, often described as golf’s Jackie Robinson and the winner of the 1967 Travelers Championship, nee the Greater Hartford Open. Thursday’s subject was Jim Thorpe.

In early June in 1979, I caddied in the Kemper Open at Quail Hollow in Charlotte. I was a 19-year-old college kid. Many of the caddies were grown black men from working-class sections of Augusta, Houston, Dallas, Little Rock, Ark., and Jackson, Miss. I certainly didn’t know that then but have learned this bit of social history over the years.

Herman “Mitch” Mitchell, famously linked to Lee Trevino, was probably the most prominent of them, but there were many others, including Sam “Killer” Foy and Dolphus “Golf Ball” Hull, who spent much of his career getting fired by Raymond Floyd and rehired by Floyd’s wife, Maria. Later that June, Hale Irwin won the 1979 U.S. Open at Inverness, Killer on the bag, in a mustard jumpsuit, despite the Midwestern heat.

This week, the PGA Tour is making its annual stop in Hartford, where Charlie Sifford won the first of his two PGA Tour events at age 45. You’ll be able to count the number of black caddies and players — and Tour officials and broadcasters and reporters — on your fingers, easily. That wasn’t always the case. The professional game is poorer — and far less interesting — for it.

One of the things that drew me to the “pro golf circuit” were the black men traveling it. When I caddied some in ’85, Killer was kind to me and he didn’t need to be. He knew the better motels and the all-you-can-eat buffets. Killer got his nickname as an undercard boxer in Houston. He once fought Sugar Ray Robinson, or so it goes.

“Sam was quiet on the course,” Irwin told me this week. “He gave me what I needed. He liked night. He liked his cars and he liked his girlfriends. On the course, he’d wear a stocking over his hair, under his hat. One time I saw him without it and I couldn’t even recognize him. He said, ‘This is my night hair.’”

The Tour then was a way of life. Now it’s a lucrative profession. You drop in and drop out. As it happens, the caddie yard at the Wethersfield Country, where the Hartford tournament was played for years, produced the caddie that paved the way for today’s caddies. The late Bruce Edwards was a white prep-school kid and the son of a dentist who caddied for Tom Watson through most of Watson’s Tour career. There was something charismatic about Bruce, as there was about Killer. Each had sui generis style. Bruce would wear turtlenecks on cold mornings and looked better than any player doing it, his longish hair touching the top of his collars. Killer tucked his pant bottoms into his socks on wet days. He was wearing knickers when Payne Stewart was still in high school.

For caddie style, Killer’s fellow caddie Golf Ball was the leader, not in the clubhouse but outside of it. One of Dolphus Hull’s signature looks was the porkpie hat with the brim up, all the way around. You could see the veins in his forehead. Ball, native son of Jackson, Miss., won with Ray Floyd and Calvin Peete and others. He dreamed about caddying for Ben Crenshaw, Texas golf legend, but never did. But there was a closeness between the two men. The pro game was more Southern then than anything else and caddie-player relationships were different.

My friend Mike Donald and I went to visit Ball in a nursing home in Jackson a few years ago. Ball was on his last legs. There was a wisdom about him.

“Crenshaw says to me, ‘Ball, what do you do if you love a girl but she don’t love you?’” Ball told us.

“If she don’t love you, you gotta let her go,” Ball said, as he recounted it for us that day.

That’s really the difference, right there. The touring black caddies from the 1970s and ’80s didn’t have the reams of data the caddies have at their disposal today. Their specialty, from what I could see, was insight into the human condition. Killer knew I needed an early-morning nod and generously nodded in my direction. And that, as a poet of New England once wrote, made all the difference.