How old is too old to win a U.S. Open? Thirty years after Hale Irwin’s record-setting victory, his mark still stands 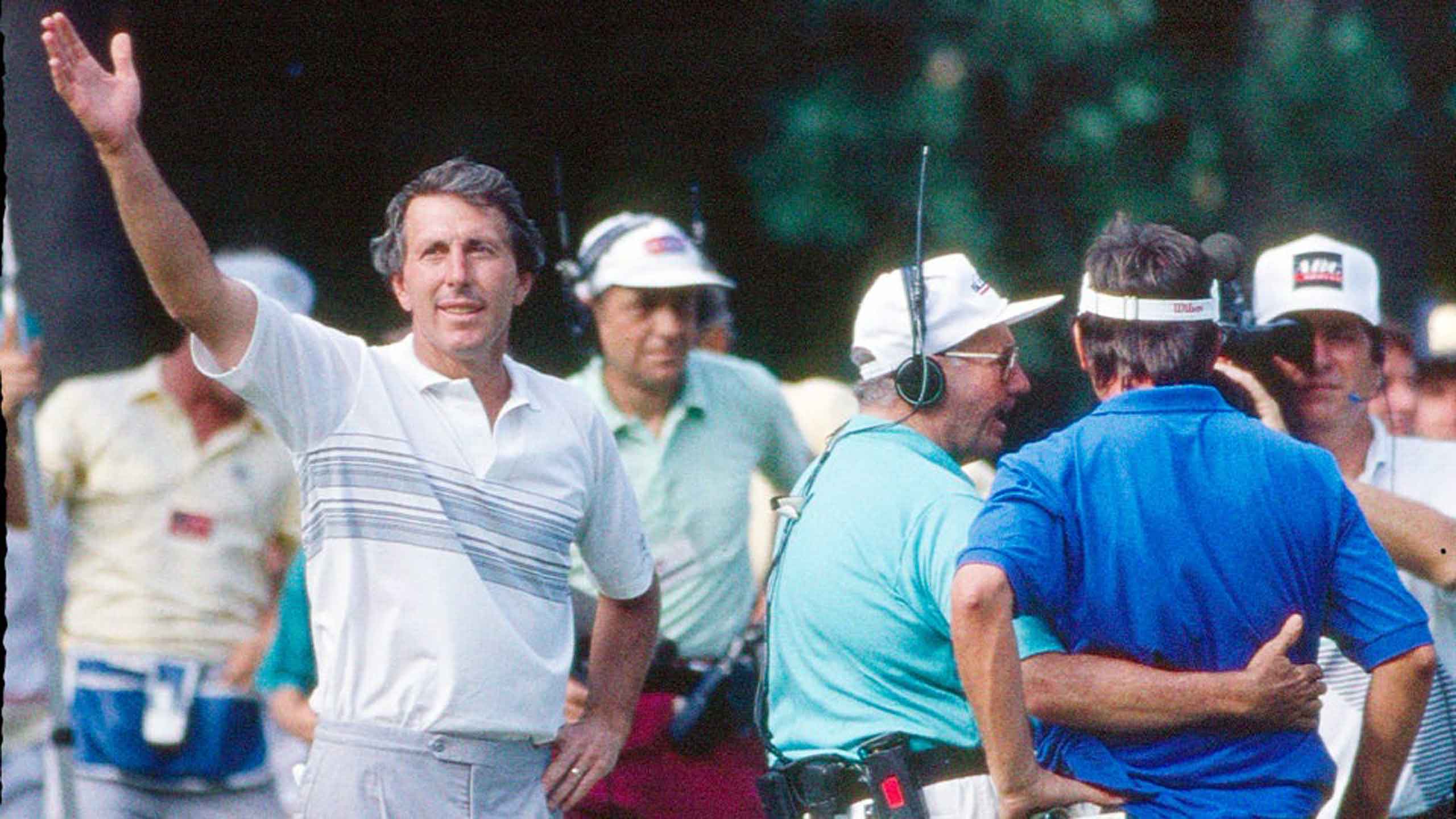 When the epic 19-hole playoff was over, Hale Irwin saluted the Medinah galleries.

Ed. note: The 2020 U.S. Open, now set for Sept. 17-20 at Winged Foot Golf Club, was originally slated for June 18-21. In a cap tip to the week that would have been, GOLF.com will be highlighting our national championship over the coming days, from its history, courses and legacy to its special ties to Father’s Day.

The U.S. Open is a slow march, not a sprint, and yet the 1990 staging of the event is best remembered for one man’s dash around the 18th green.

After dropping an improbable birdie bomb that would land him in a Monday playoff at Medinah, Hale Irwin set off on a celebratory lap that called to mind his days as a fleet-footed defensive back in college.

The difference being that the former gridiron star was now 45.

The next day, when Irwin edged Mike Donald in 19 extra holes, he became the oldest player ever to win the U.S. Open, a record that still stands.

“Do I think it will ever be broken?” Irwin asked this week from his home in Arizona, repeating a question that had been put to him over the phone. “The only definitive answer I can give you is that it depends.”

On the one hand, he noted, age, like par, is just a number, less a physical condition than a state of mind. And given the value of experience in golf, there’s no reason, he said, that a Grecian Formula user couldn’t put a whipping on the kids.

“As long as you keep yourself in reasonably good shape, you should be able to stay competitive,” Irwin said. “When you’re in your forties as a golfer, you’re still in the prime of your career.”

On the other hand, he offered, winning a major isn’t easy. Never has been. But especially in the modern era, with the profound depth of talent in professional golf, and long, gnarly setups with lightning greens that favor power players with young nerves.

Recent history has not been kind.

After Irwin, the second-oldest winner of the championship is Ray Floyd, who was three months shy of his 44th birthday when he pulled off the trick at Shinnecock Hills in 1986. Before Floyd, the pickings are slim. You have to go back to 1920 (Ted Ray, age 43, at the Inverness Club) to find the next name on the seniority list.

Not that graybeards have been dominating the other majors, either. But just last year, Tiger Woods, at 43, earned his fifth green jacket, while in 2016, also at Augusta, Bernhard Langer played in the second-to-last pairing on Sunday at the Jimmy Buffet-groupie age of 58. Throw in Tom Watson, at 59, with his near miss in the 2009 British Open, and a 53-year-old Greg Norman threatening to claim the claret jug in 2003, and you start to get a sense that the other majors might provide more chances to the Centrum Silver set.

Statistics, of course, can be misleading, but here’s one that seems telling: In the 30 years since Irwin’s victory at Medinah, the average age of the U.S. Open winner is around 30, the youngest average winning age for any of the majors. (For the Masters and the PGA Championship, it’s close to 32; for the British Open, the average is nearly 34.)

Over that same period, the U.S. Open has seen close calls and feisty showings. At the 2016 edition, Jim Furyk finished T-2, three shots behind Dustin Johnson. And if Phil Mickelson hadn’t stalled down the stretch in 2013 at Merion (where he finished T-2 behind Justin Rose), we might be telling a different story.

But for now, the narrative we’re sticking to is this: Our national championship is no country for old men to conquer.

What will it take for that to change?

Age, as Irwin says, might be just a number, but it’s also a number that must be overcome. That was Irwin’s outlook as the 1990 season got underway. Though his ball-striking remained as pure as ever, he was mired in a five-year victory drought. The last time he’d raised a trophy was at the Memorial in 1985. The shots were there. The scores were not.

“I’d started my design business, and I wasn’t as committed to my game as I’d once been,” Irwin said. “Physically, I knew I was still capable of playing at a high level, but I wasn’t getting results. I was playing what you might call ‘unfulfilled golf.’”

Stepping back and taking stock, Irwin resolved to redouble his focus. He spent hours reflecting on his best finishes, and what it had taken to produce them. He took notes and drafted plans. He ramped up his practice sessions. He fine-tuned his putting. When he showed up on the tee box, he had his game face on.

In the 30 years since Irwin’s victory at Medinah, the average age of the U.S. Open winner is around 30, the youngest average winning age for any of the majors.

His intensity increased as summer approached and the USGA granted him a special exemption into the U.S. Open.

“I felt extra pressure to perform,” Irwin said. “I wanted to be representative of the quality of player they believed me to be, and to show that they hadn’t made the wrong choice.”

He began the final round in a tie of 20th, four shots behind the leaders. Paired with Greg Norman, Irwin played a steady front nine, but just after the turn, something clicked. Four straight birdies put him in the hunt, before the birdie on 18 that put him in a playoff.

Irwin was not the only grizzled veteran in the mix. Curtis Strange was there, angling for a third-straight U.S. Open title, as was Nick Faldo, Strange’s U.S. Open bridesmaid in 1988, who would finish one shot out of the playoff. Norman was still smacking a throwback persimmon driver. Jack Nicklaus, at 50, had made the weekend, and made things interesting with a third-round 68.

Youth, per usual, was represented, too. Mickelson was playing in his first U.S. Open. Ditto David Duval. A pair of fresh-faced studs, vying for low-amateur in the event.

Both were also hungry, another vital factor, Irwin says, that now becomes an issue as players age. Things are different for today’s emerging stars than they were in Irwin’s generation. Purses are so fat and young stars earn so much, that money ceases being a motivating factor. Whether young guns will stay healthy is also hard to say.

“With the modern swing, as hard as these guys go at it, by the time they get to 35 or 40, there’s very often physical toll,” Irwin said. “And if you’ve already earned a fortune, then the question becomes, do you still have that drive, do you still want to compete, do you have other reasons to push yourself?”

Surveying the landscape, Irwin sees only a small handful of candidates who are plausibly positioned to break his record. Tiger Woods (now 44), he says, seems the most likely; his first chance would come next year at Torrey Pines, a venue that has been good to Woods. Mickelson (49) and Furyk (50) could also do it; both will be in the field this year at Winged Foot. But a win for one of them, or any other player in their age group, will require more than great shotmaking. It will also take a mental leap.

“In golf, and life, so much comes down to mindset,” Irwin says. “I’m 75, so when I look in the mirror, the guy in the reflection might look old. But that’s not how I feel. As far as I’m concerned, I’m still young.”