If Jim Thorpe isn’t the most popular man in golf, he’s in the conversation 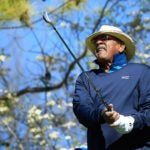 Jim Thorpe tees off during the Bass Pro Shops Legends of Golf at Big Cedar Lodge in 2018.

Beginning today through Sunday, Bamberger Briefly is making a four-day return in memory of, and in tribute to, Charlie Sifford, often described as golf’s Jackie Robinson and a former winner of the Travelers Championship, nee the Greater Hartford Open.

When the Tour goes to Hartford, as it has every year since 1952, I always find myself thinking about Charlie Sifford. Sifford won twice on Tour, was never invited to play in the Masters and didn’t get to compete on golf’s greatest stages when he was in his 20s and 30s. In other words, when he was in his world-class prime. We all know his crime or should: playing golf while black.

We are living in a time of reckoning. How we lead our lives, how we make a living, how we breathe and who we breathe on. How we understand one another. My life has been so enriched by black Americans — every aspect of my life — and I have only inadequate ways to express my appreciation for Miss Kittles (third-grade teacher), Cleon Jones, Skip James, Lorraine Hansberry, Peggy Fair (of Mannix), Darlene Love and today’s subject, Jim Thorpe.

In an extraordinary essay published here this week, Laz Versalles, a former club pro, wrote about the richness of the black golf experience in the United States, with a reference to the path so many black American golfers have had to the first tee through the caddie yard. Thorpe, the son of a course superintendent in Roxboro, N.C., knows all about that path. Thorpe, who is 71, does not go by JT, as Justin Thomas does. He goes by Thorpey, and, in tighter golf circles, by MoFo.

You would actually be hard-pressed to find a better-liked person in professional golf. Let me put that another way. Nothing about Jason Dufner screams people person. But he loves Mo. They hang.

Yes, it’s true that Thorpe was not a role model for tax-paying. (He once showed up for a house-closing in Buffalo with a suitcase filled with cash.) But he played golf similarly to Arnold Palmer, without Arnold’s putting stroke. (I once saw Thorpe experimenting with a glass putter, and, on another occasion, with a cylindrical putter.) Thorpe’s golf was charismatic, as is he. When he was the solo first-round leader of the 1981 U.S. Open at lily-white Merion, there was surely millions of us rooting for him. Trevino, your winner at Merion over Big Jack in ’71, and now this guy? That would be too good.

I’ve seen Thorpe in airports, hotel lobbies, practice tees, steakhouses and once at a racetrack. He recognizes me by face but I doubt he knows my name. I say that because everybody wants to talk to him, and he seems to enjoy it, but he can’t possibly keep track of all of us.

I saw him at TPC (as Thorpe refers to the Players Championship) last year. I said hi and we spoke for an hour. He was following Dufner. Justin Leonard, doing TV work that week, drove by Thorpe in a cart, hit the brakes, jumped out, said, “Thorpey!” and gave the giant man a hug. We talked about his prison sentence, Dufner’s backswing, Arnold’s follow-through, Tiger’s comeback.

“Tiger’s a funny dude,” Thorpe said. He described seeing him in the locker room, being nice to people, chit-chatting with this person and that one.

“I said to him, ‘Hey, Tiger, man — I want to see the mean Tiger,’” Thorpe told me. “Tiger says, ‘I’m mean when the bell goes off.’ I said, ‘No, man, I want to see you being mean all the time.’” I’m not saying this is a verbatim quote. Children read this website.

We walked over to a lemonade stand and, sweet as could be, Jim Thorpe asked for extra sugar in his.