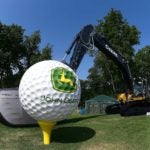 The John Deere Classic has been canceled. It was to be the first event to allow fans.

Check in every week for the unfiltered opinions of our writers and editors as they break down the hottest topics in the sport, and join the conversation by tweeting us @golf_com. This week we discuss whether other PGA Tour events could be canceled if they are to be played without fans, the next partners for The Match, whether players would mics, and more.

1. The PGA Tour’s first scheduled event that was to allow fans, the John Deere Classic, was canceled for this year. According to Golfweek, sources indicated that the title sponsor of the event didn’t want to risk having fans at the event in order to minimize the risk of a coronavirus outbreak. This follows news that the revised schedule of the European Tour will not allow fans for at least its first six events. Given the challenging economics around fan-less events, do you expect other tournaments will follow suit and pull the plug?

Josh Sens, senior writer (@JoshSens): I don’t think many will. Not all events make hay the same way. Some draw larger revenue streams from TV ratings and corporate sponsors and are less dependent on community turnout. The John Deere has more of the older school community event feel. The Tour’s other Illinois event – the BMW – is a different animal, and I think would be less likely to cancel under the same circumstances. That’s just a guess. I don’t know the numbers. But I’m not expecting a rash of cancellations due to a no-fans requirement. As for whether we might see other cancellations down the road due to health and safety concerns, that’s another question.

Sean Zak, senior editor (@Sean_Zak): I think the first four events will have such a great showing from players that events should be happy enough with the TV ratings alone. The fields are HUGE for the first two events, at least. Remember, we’ve got a major scheduled for basically two months from now. There will be a fun, valuable run-up to that even if there are no fans on the course.

Josh Berhow, managing editor (@Josh_Berhow): I don’t think it will become a trend. The John Deere was in a tough spot. By being one of the first big-time sporting events to allow fans — if not the first — it was creating a model for everyone else in the sports world, not just the golf world. The whole event would be under a microscope, as commissioners and organizers would be watching like hawks to try to gain any learnings from what worked and what didn’t and how they could incorporate that into their own plans. That’s tremendous pressure. But why I don’t think this will continue as a trend is because we’re learning more and more each day about how to be safer and best practices. That’s going to evolve even more, and this period of learning will be crucial for others on the schedule to get their plans in place.

Dylan Dethier, senior writer (@dylan_dethier): I think the three of you have it covered. In essence: Having fans on site soon is still optimistic, but possible — but non-Deere events will probably go on regardless.

2. The Match II was a ratings bonanza, attracting a viewership of 5.8 million, the largest-ever audience for a cable TV golf telecast. Now that you’ve had a chance to digest the event, how much of its success do you attribute to the participants/format/telecast vs. there simply being not much else to watch?

Sens: People were starved for live sports. The fact that Brady struggled so badly also made it more compelling and relatable. I thought he was by far the most interesting player in the broadcast precisely because he was mostly awful.

Zak: In a future week, when there’s other sports on TV, that match would do … fine. It had the star QBs and our first look at Tiger in a long time. Both those things will be difficult and potentially impossible to replicate.

Berhow: It was the perfect storm, really. Tiger and Phil didn’t feel like they had to carry the event and Brady — the MVP of it all! — made it that much more watchable since he became the most relatable player of the entire group. It wouldn’t have been near as fun to watch if Brady was cruising along and playing boring, but good, golf the whole time, like Peyton was.

Dethier: The personalities involved allowed it to become a cross-cultural event for a culture-starved world. The presence of Peyton and Tom gave every sports fan permission to tune in. So it’s a combination of factors, and it was a huge success — but it would be improbable to replicate that kind of audience.

3. Phil Mickelson told the Los Angeles Times that he’s already in discussions for The Match III, and that the event could possibly be annual. He mentioned that the next match could go with celebrity athletes again (Michael Jordan, Steph Curry, Patrick Mahomes and Tony Romo were mentioned), or it could be played with celebrities (Bill Murray and Larry David were discussed). Mickelson also mentioned that The Match could see younger pros playing with Phil and Tiger, or against Phil and Tiger. If you’re producing The Match III, what’s your dream scenario? (No duplicates, please!)

Sens: I dig the Larry David/Bill Murray combo because it would be entertaining no matter what happened with the shots. Hank Haney and Butch Harmon? Are there any celebrity golfers who legitimately dislike each other? A petty feud could make for good TV.

Zak: Tiger and Steph Curry vs. Phil and Michael Jordan. Now I know this seems obvious AND unlikely, but we’re dreaming here.

Dethier: If we’re dreaming, Charles Barkley’s gotta be on Tiger’s team instead of Steph.

Berhow: Tiger and Phil paired with two of the most marketable and best players in women’s golf, Lexi Thompson and Nelly Korda. How about Tiger and Lexi vs. Phil and Nelly? I’m in.

Dethier: Along those lines, I wonder if the action would be improved by having an additional match or two. Something to cut to in between shots, etc. would help with pacing. That way it’s easy to get a more representative group, too. Maybe pit a 25-and-under team against a 40-and-older squad. Jin-Young Ko, Nelly Korda, Lexi Thompson, Jon Rahm, Sungjae Im and Viktor Hovland against Woods, Mickelson, Vijay Singh (!), Juli Inkster, Cristie Kerr and Annika Sorenstam. It’s for a golf crowd, not a football crowd, but tell me you’d skip that?!

4. Charles Barkley, one of the announcers for The Match: Champions for Charity, said this week on The Dan Patrick Show that should fans not be allowed to attend PGA Tour events, players should be mic’d up. Nice idea, but would players allow it?

Sens: Some wouldn’t. But I think enough would that viewers would end up getting the occasional interesting earful. I’m bullish on Barkley’s idea.

Zak: I think most players wouldn’t. At least not on the weekend. It’s all good and fun until things get serious, and these players often put brand and clean-cut self over personality. That’s proven tough to change!

Berhow: I won’t say it’s never going to work, but it’s going to be really hard for it to work. If it’s every player, then it will be easier to make it happen. But I think the trouble comes with just making it a few players. Is it fair to guys like Rory and JT and Tiger, whom fans would love to be mic’d up, when a random Tour pro ranked somewhere in the 60s isn’t mic’d up and doesn’t have to worry about what he says and can just go out and play his game under the radar? Or if you do it with, say, the final pairing on a Sunday, to me that’s an unfair ask of a player who isn’t used to being in that situation in the first place. Winning is hard enough. Worrying about what you are saying — filtering your emotions while also being conscious of the fact that people want you to be entertaining — is not something these guys want to think about.

Dethier: I think it could work the way it works in the NFL’s “Mic’d up” which, as I understand it, allows someone from the league office veto power in order to preserve player reputations, etc. So it wouldn’t be live mic’d up, but the broadcast could toss to some sound from earlier, which would be awesome.

5. In an interview with Golfweek, two-time major champion and four-time Ryder Cup captain Tony Jacklin said Sergio Garcia is the biggest underachiever in golf. “He’s been one of the best players on the planet for the last 20 years and doesn’t have much to show for it,” Jacklin said, before dropping this bomb: “Seve [Ballesteros] had more courage in his little finger than this lad.” What do you make of Jacklin’s stinging assessment?

Sens: Ouch. But to put a softer spin on it, I suspect Jacklin meant it more as praise for Seve than as an outright slam on Sergio. It almost came off as a grouchy elder administering tough love.

Zak: What does Sergio’s courage have to do with anything? It would be easy to look at current Sergio and say that Jacklin was right, but El Niño has had a very golf good career to this point. The fact that he doesn’t have two majors might be disappointing, but others have underachieved worse.

Berhow: ‘Twas harsh! I don’t know what kind of a relationship they have, but that seemed more like a jab at Sergio than it did a hat tip to Seve. I think a lot of people were expecting Sergio to win more than one major, but 10 PGA Tour wins and 16 Euro Tour victories — not to mention his Ryder Cup prowess — is nothing to scoff at. Although this could have been a shot at some of Sergio’s other antics (spitting in a cut, destroying greens and bunker tantrums, etc.), which isn’t great.

Dethier: It’s times like these you know just how relieved Sergio must be to know he’s got a standing dinner invitation Tuesday of Masters Week. Gotta be big for confidence.

6. Journalist Armen Keteyian revealed this week on the Burst Your Bubble Podcast that a Tiger Woods documentary based on his best-selling book is coming to HBO this fall. What would you like to see from a Tiger doc?

Sens: Honesty, no matter how brutal.

Zak: I would like Tour players to try and contextualize Tiger’s greatness (you can’t) but also to say what they really thought of him in the 2000s.

Berhow: Something new. But since this doc is essentially based off the Keteyian/Jeff Benedict book, that might not happen unless something else was unearthed in the interviews that followed. Either way, this will be good — and include some stuff Tiger’s camp probably isn’t psyched about digging up again, I’m guessing — and I’m looking forward to it.

Dethier: There are advantages to a non-golf entity like HBO tackling this. Fewer Tiger-related relationships to worry about (I think?) plus the advantage of a big-picture view and context as to where Tiger fit into the cultural landscape. But Sens is right: honesty. Multi-dimensionality. We’ve seen the highlight clips by now, so what else do you have for us? If Tiger isn’t participating, it’s going to be hard to break completely new ground — but I’m hoping they will anyway.