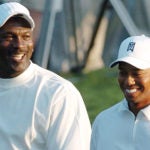 Could Michael Jordan and Tiger Woods team up in a version of The Match?

The Match III could feature Michael Jordan and Steph Curry.

Or Tony Romo and Patrick Mahomes. Or Larry David and Bill Murray. Or young PGA Tour stars, such as Justin Thomas. Or those groups, and others, could each be featured in matches beyond just a third. All matches, of course, would include the stars of the first two, Tiger Woods and Phil Mickelson.

“What if Tiger and I were to team up and take on two younger players, or what if we were to team up with younger players and have it be a real high-level golf competition?” Mickelson told the Los Angeles Times. “I think there’s a market for that. But you have to have some personality in there, too, so a guy like Justin Thomas showed how funny he is and he would add a lot to an event like that.

“I think you could showcase guys like Steph Curry and Michael Jordan or Tony Romo and Patrick Mahomes, who are all good golfers, elite talents and have great personalities. Those personalities are going to come out with this event. Or you could have someone who loves the game and is competitive but is really entertaining like Larry David and Bill Murray. I think that could shine.”

There likely will be at least a third Match.

“I don’t know what specifically it will look like, but it would be a competition while also being entertaining and getting the right mixture of individuals to have their personalities come out the way Peyton and Tom shined in this last one,” Mickelson said. “They were humanized with their golf game, yet they were competitive and they were funny and entertaining.”

Zuriff told the Los Angeles Times that the next event would also likely return to the Friday after Thanksgiving, the date of the first Match, in 2018. This year’s Match came as the PGA Tour has been on hiatus since mid-March due to the coronavirus pandemic, and the event raised money for coronavirus charities.

“I thought we learned a lot from the first match to make the second one much better and I think we can continue to add on to that,” Mickelson said.