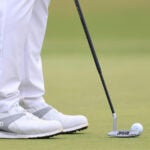 Not searching for the latest quick fix helped Louis find what he was looking for.

Seeing a swing as silky as Louis Oosthuizen’s, it’s hard to think about anything else.

How could you? His move is the kind of golf swing that seems like it shouldn’t exist. A beautiful fusion of technique, rhythm and athleticism. It’s so captivating that this is actually an article about his putting, yet I’ve just spent the first 65 words talking about his golf swing.

But placing Louis’ beautiful golf swing to one side, it’s his putting that has been the most transformative part of his game this season, as the South African vies for a long-awaited second major at the 2021 Open Championship.

This, it must be said, is a minor miracle considering how poor the 2010 Open Champion used to roll the flatstick: He ranked outside the top 120 on tour in SG: Putting three times between 2014 and 2020, and ranked 91st on average between that time.

So what changed? What alchemy did Oosthuizen conjure?

Turns out, Louis’ magical formula was actually rather boring.

Putting is a fickle art, and when the putts don’t drop, it doesn’t take long to go searching. Louis spent years searching — with his technique, with his equipment — but at risk of sounding like a poorly written rom-com, it was only when he stopped looking that he actually found the solutions he was looking for.

It started with his equipment. Finding a model he liked — in Oosthuizen’s case, a Ping Voss putter — and keeping it in the bag.

“I went through a stage where I changed a lot of putters. Every week we were trying something. I realized quickly that there’s no way to find any consistency in putting if you do that,” Oosthuizen said. “I found one that I really like the look of and I sort of worked on it…I’ve been with that putter for a long time now.”

Stability was Louis’ new mantra for putting. With a putter he was committed to, he set about finding the same in his pre-shot routine.

Oosthuizen and his coach, GOLF Top 100 Teacher Justin Parsons, wanted Louis’ arms tension-free and loose during his stroke, so they created a routine around that. Louis shimmies up to his golf ball, slides his hands down to the bottom of the grip, then up to the top, then takes his grip, looks down and hits the putt.

Oosthuizen does that routine with every putt he hits, regardless of length or importance. From a three-footer on the practice putting green to a 50-footer for eagle at the Open Championship, it’s the same every time.

Boring though it sounds, it’s that rigidity of routine which actually frees-up Oosthuizen. It puts him in a comfortable and familiar place before he hits his putt. And that consistency, he says, allows him to focus on executing.

“Going through all of that and sticking with it has really helped me a lot,” Oosthuizen says. “It’s really paid off for me.”

Indeed, it may end with him bringing home another Claret Jug on Sunday. It’ll presumably make for a nice addition on his mantle. As for his graveyard of old putters? He’s got a different plan for those.

“I’ve got a bag of them at home,” he says, “that I might just throw in a river someday.”