Tour Confidential Daily: Which player isn’t getting the pre-Masters hype they deserve? 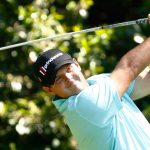 Patrick Reed hits his tee shot on the 11th hole at Augusta National during his Wednesday Masters practice round.

The Masters — an April Masters! — begins Thursday, five months after its November playing. Dustin Johnson looks to defend and is no doubt one of the favorites, along with Bryson DeChambeau, Justin Thomas and the resurgent Jordan Spieth. But let’s dig a little deeper. Who, in your mind, isn’t getting the pre-Masters hype they deserve?

Jessica Marksbury, multimedia editor (@Jess_Marksbury): It’s gotta be Brooks Koepka. I know the state of his knee is questionable, but you have to believe that he’s confident he can compete, otherwise he wouldn’t be here. And given his past three finishes at Augusta — T11, T2, T7 — there’s no question he deserves a bit more ink.

Josh Sens, senior writer (@JoshSens): Compared to last November, DeChambeau is coming in with nowhere near as much hoopla around him, which is sure to stand him well, I think. Beyond Bryson, though, we aren’t hearing a ton about Patrick Reed, a past champion who is custom-built for the kind of lightning-fast conditions that have been forecast. And then there’s Rory. To borrow from a question the McIlroy family no doubt asked at their Seder this year: Why is this Masters different from all the others? Because we’re not hearing nearly as much about Rory’s quest for a career grand slam. That must be a relief to him. His recent struggles have ratcheted down some of the expectations around him. Maybe that means it will be him and Bryson in the final pairing Sunday.

Alan Bastable, executive editor (@alan_bastable): Thanks for leaving some for the rest of us, Sens! How about your world No. 9? That would be … Mr. Webb Simpson. Dude just plain shows up at the majors: just one finish outside the top 30 in his past 11 major starts, including a T10 at the November Masters and T5 in 2019. Pretty stout.

Zephyr Melton, assistant editor (@zephyrmelton): Why is no one talking about Xander Schuffele? He used to be in the pre-tournament conversation at every major, but this week has been eerily silent. He’s got seven top 10s in 14 career majors, including a T2 at the 2019 Masters. He’s one of the most complete players in the game, and it’s only a matter of time before he breaks through.

James Colgan, assistant editor (@jamescolgan26): THIS far down a TC question about quiet contenders and no talk of noted underdog Jordan Spieth? On a serious note, Justin Thomas is one of the tournament favorites, but isn’t getting nearly the hype a Players champ and top-5 player in the world returning to Augusta deserves.

Nick Piastowski, senior editor (@nickpia): Phil. Is this really the end of the line for the three-time green jacket winner? I still think he has one more run in him. (Betting note! And if you believe he does, his odds are beautiful.)