‘I said, you’re Bryson DeChambeau:’ Bryson’s surprising other round Tuesday in Augusta 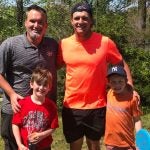 Parker Straughn is a talker, the 7-year-old’s dad, Seth, says. So as any good father would do, Seth leaned into his boy’s strengths. Three strangers had joined the Straughns and Parker’s friend, Nathan Barrete, on the disc golf course at Lake Olmstead Park — or strangers, at least, to the kids. Seth quickly recognized the muscled twenty-something decked in an orange Puma shirt, black shorts and a backward cap.

Dad, Parker eventually asked, do you know that guy?

“I’m a huge golf fan, and now a huge disc golf fan, but just joking in front of Bryson, I told Parker that Bryson doesn’t really hit the ball all that far, but he hits it pretty straight,” Seth told GOLF.com. “Parker brought that up toward the end of the round, made sure that Bryson knew that his dad told him that Bryson can’t hit the ball that far.

“Bryson got a pretty good chuckle out of that.”

On Tuesday, two days before the Masters, instead of banging balls into the ether at Augusta National, Bryson DeChambeau, cough, cough, the PGA Tour’s longest hitter statistically, was instead playing another golf, disc, for the second time ever. And being razzed by a son. And tossing a few borrowed discs into the water. And, after a couple hours, getting a swing lesson from a dad.

“The cool part was really just walking down the fairways and chatting with him,” Seth said. “He was talking about Augusta and how he felt about his golf game. I even asked him some other questions that were pretty cool. Just to be in the moment. You expect these guys to be larger than life, you know? He wasn’t.”

DeChambeau, on Saturday, played disc golf for the first time, he told GOLF’s Sean Zak. Lake Olmstead is both near where the defending U.S. Open champion is staying and Augusta National, and DeChambeau said he wanted to “take my mind off the week. Just try and be relaxed as possible. Obviously, Augusta can be a stressful week and played here enough to realize that, you know, I know the golf course, I’m comfortable with it, so not to exert myself.” Sometime shortly after lunch on Tuesday, DeChambeau, along with two friends and three discs, played again.

On the sixth hole tee box, they caught up to a dad, a son and the son’s friend, who were waiting for a larger group ahead of them. Seth plays golf, too. He’s an 8-handicap who plays every so often and next week is going on a three-day golf binger. He also lives near Augusta and is used to seeing golfers and celebs year-round. But it’s not every day you see one of the Masters favorites at a disc golf course just about 48 hours before he tees off in round one.

“I said, hey, what’s your name. And when he said Bryson, it clicked in my head,” Seth said. “And I said, you’re Bryson DeChambeau and he said yeah. We chatted for a little bit, took some pictures and then we all teed off on hole No. 6. And that’s kind of how the day started.”

They played the sixth. Then the seventh. They’d skipped two holes ahead to get past the large group, and Seth thought then that Bryson and friends would go off alone. The sixsome would tee off on 10, and a half-hour or so together turned into an afternoon.

They’d talk golf. Seth said Bryson told him he liked his chances this week. They talked Pokemon Go, too. “My son likes to get to the disc golf course and when he gets tired of doing discs, he’ll grab my phone and play some games,” Seth said. “Bryson was interested in that, just wondered what he was doing. And then Parker has a pretty good forehand and so Bryson and the guys he was with were encouraging and uplifting to Parker and Nathan even though they can’t throw the disc very far.”

A few weeks ago, DeChambeau triumphantly cleared the water on the par-5 6th at the Arnold Palmer Invitational. How was he hitting ‘em at Lake Olmstead?

“I think he did well,” Seth said. “You could tell he was a beginner, just like anyone else picking up the game. The thing about the starter pack of discs that they brought with them, those things are super lightweight and a guy as big as Bryson, it’s hard to throw those discs like that. I actually started letting him use some of the discs that I had in the bag and letting him mess around with some of those things. That helped some. He definitely started to improve as the day went on.”

“We may or may not have lost some of my discs at the bottom of Lake Olmstead.”

“He may or may not have tossed some of my discs into the bottom of the lake.”

Did he pay for them?

“He did not, he did not. I wouldn’t have taken it from him,” Seth said. I did ask him to sign some discs at the end of the round, so I have a couple signature Bryson DeChambeau discs in my bag now.

“He did keep apologizing for it, but I told him it wasn’t a big deal. I figured an afternoon hanging out with one of the top golfers in the world was good enough for me.”

I’d like to tell somebody one day that I taught Bryson DeChambeau a few things about playing golf. And I might leave out the detail at the end that it was disc golf.”

On the Saturday before his U.S. Open victory last September, DeChambeau memorably hit ball after ball after his round at Winged Foot. On the Tuesday after his round at Lake Olmstead, he was on an open disc golf hole. Seth is new to disc golf, too, but he can wing it a bit, and the 34-year-old project manager was teaching technique to the 27-year-old eight-time PGA Tour winner.

They’d do so for an extra 10-15 minutes, two days before the Masters and maybe six before DeChambeau puts his two large arms into a green jacket.

“You could tell his mind was working a little bit, trying to figure out some of the finer details,” Seth said. “We were working on a few of those things. You could see his competitive spirit come out toward the end as he was throwing disc after disc. He kept saying, one more, one more, trying to figure it out.”

“I’d like to tell somebody one day that I taught Bryson DeChambeau a few things about playing golf. And I might leave out the detail at the end that it was disc golf.”